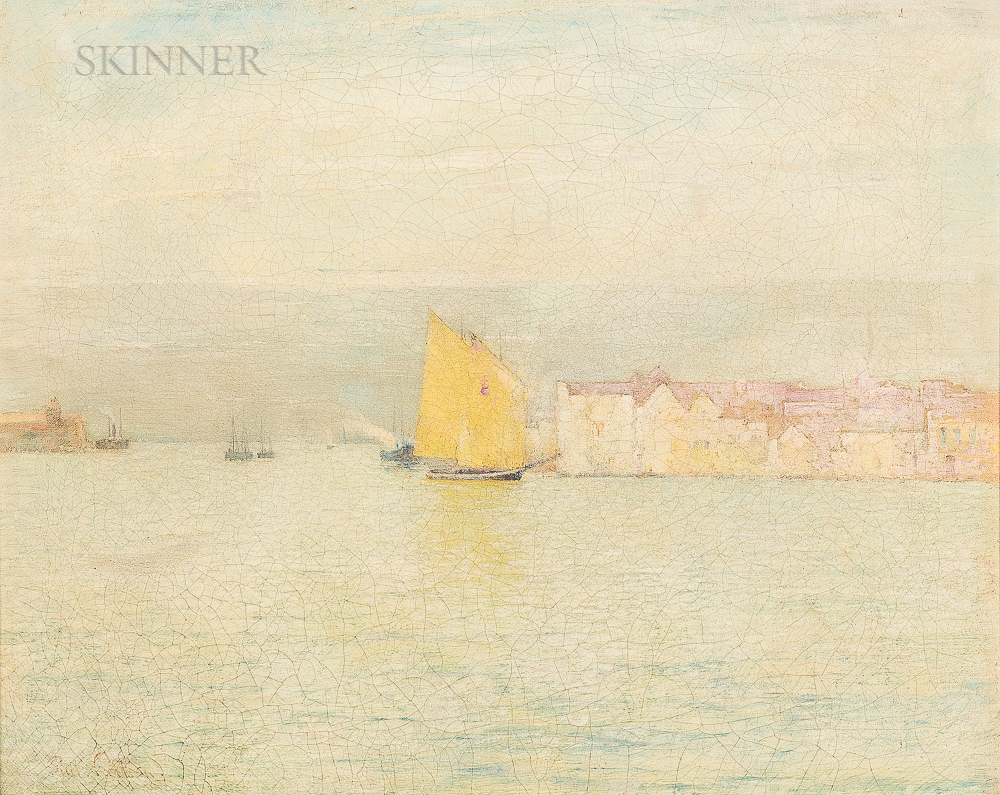 N.B. Titled and dated circa 1908 by the Emil Carlsen Archives (ECA record control number 26038). Carlson likely painted this luminous scene during a Christmas visit to Venice with his family. Many of the works he completed in Venice were intended for his April 1909 exhibition at Bauer-Folsom Galleries, New York (see http://emilcarlsen.org/portfolio/emil-carlsen-venice-ca-1908/).

Still life and impressionist landscape painter Emil Carlsen was born in Copenhagen, Denmark, and first studied architecture at the Danish Royal Academy. At the age of nineteen, he left Denmark for the United States, working as an architectural draftsman and assistant to the Danish marine painter Laurits B. Holst in Chicago. In 1875, he traveled to Paris to paint and study, immersing himself in the still life paintings of Jean Baptiste Siméon Chardin (1699-1779) which would greatly inspire his own work. Back in the U.S. he lived in New York and Boston, befriending fellow painters such as John Francis Murphy and Childe Hassam, linking him to some of the best known American Impressionists. From 1884 to 1886, Carlsen returned to Paris, where his palette lightened. In 1887 he was called to direct the School of Design in San Francisco, where he shared a studio with Arthur Matthews. In the end Carlsen was not happy in California, noting a dearth of opportunities for sales and exhibitions, and in 1891 he returned permanently to the East Coast, living in New York and Connecticut. Dogged by poverty in his early years, Carlsen later enjoyed great financial success. He exhibited widely at the best venues of his day, and he was awarded many prizes, including gold medals at the Pennsylvania Academy of the Fine Arts and the National Academy of Design. He was made a full member of the National Academy in 1906. Carlsen painted many landscapes from his residence in Falls Village, Connecticut, and along the coast of Ogunquit, Maine. Emil Carlsen showed at the Macbeth Gallery in New York from 1911 to 1932, including several solo shows, as well as group shows with Childe Hassam, Frederick Carl Frieseke, Theodore Robinson, Willard LeRoy Metcalf, and J. Alden Weir.
Estimate $20,000-40,000

With a partial label from the House of Heydenryk, Long Island City, New York, affixed to the frame.