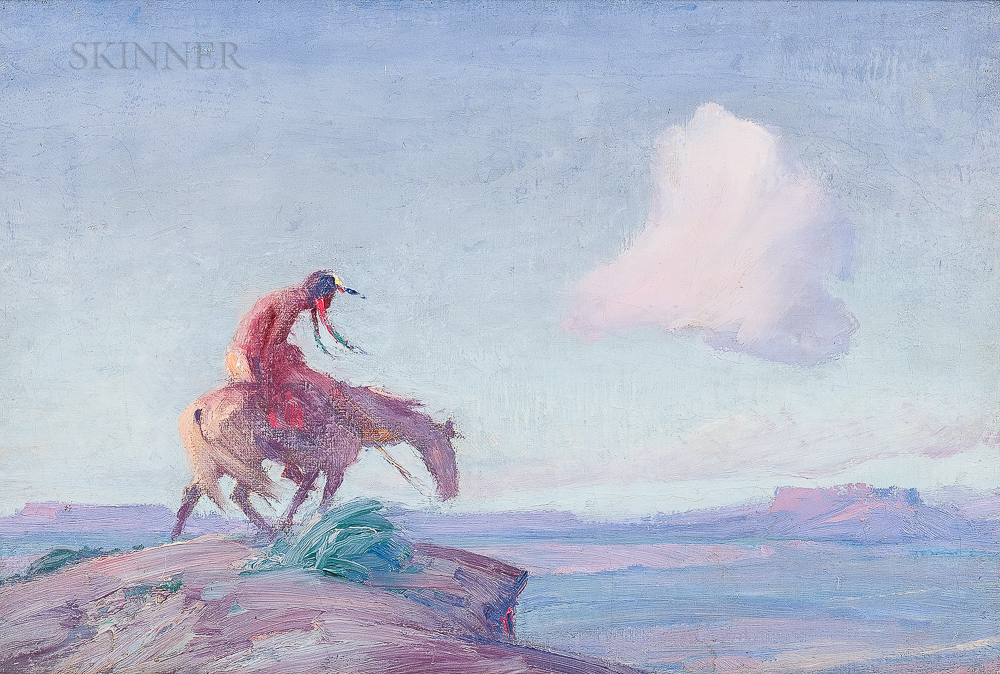 Almost There
Unsigned, identified in an inscription on the stretcher, on a label from Zaplin Lampert Gallery, Santa Fe, New Mexico, affixed to the frame backing, and in documents from The Jamison Gallery, Santa Fe, and from Crawford R. Buell, attorney for Ina Sizer Cassidy, both encapsulated on the frame backing.
Oil on canvas, 12 1/4 x 18 1/4 in. (31.0 x 46.5 cm), framed.
Condition: Lined, scattered minor retouch, stable craquelure.

Provenance: From the artist to his heir, Ina Sizer Cassidy, widow of the artist; to the estate of Ina Sizer Cassidy (1965); to Robert G. Spears, Albuquerque (1965); by family descent to the estate of Mrs. R.G. Spears, Virginia Beach (1996); by family descent to Captain Larry Spears; to Jamison Galleries, Santa Fe, New Mexico (1996); purchased from the above by the current owner in 1997.

N.B. Gerald Cassidy was born and raised on the Kentucky-Ohio border. He studied art under Frank Duveneck at the Cincinnati Art Academy, then moved to New York to further his study and begin his artistic career. Poor health forced him to move to New Mexico where he flourished both physically and artistically, and the local indigenous peoples became his favorite subject. He and his wife ultimately settled in Santa Fe. Here, thanks to a commission from Edgar L. Hewitt, Director of the School of American Archaeology, Cassidy began a project to document the culture of the Pueblo Indians. The project turned into a life-long pursuit for the artist.
Estimate $8,000-12,000