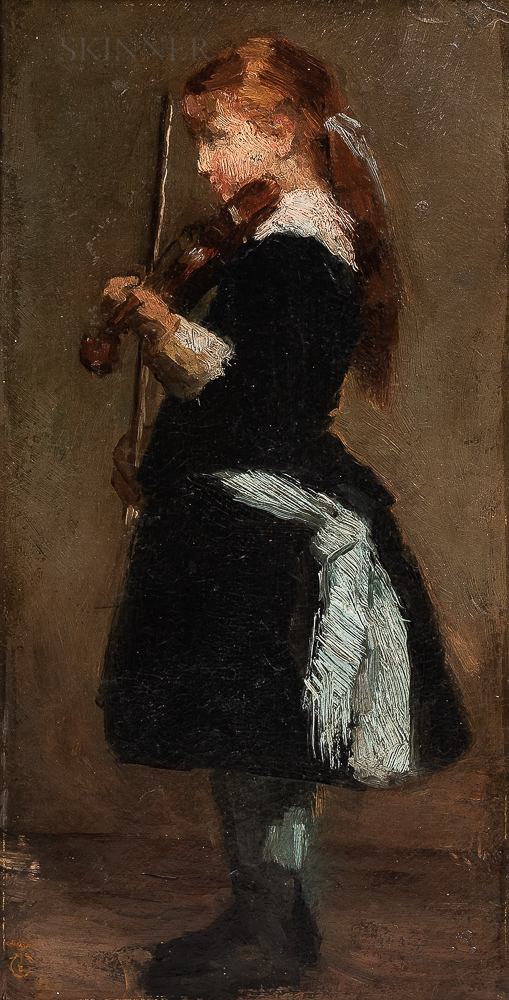 Girl with a Violin, Said to be Belle Botsford as a Violin Student in Paris
Signed with a monogram, possibly an overlapping "OT" l.l., identified and attributed to William Morris Hunt in an inscription in a later hand on the frame backing paper.
Oil on pressed paperboard, 9 x 4 7/8 in. (23.0 x 12.5 cm), framed.
Condition: Minor surface imperfections and frame abrasions, minor surface grime.

N.B. One must rely on the inscription on the frame backing paper to identify this young violinist as Belle Botsford (American, 1868-1929). Described as Titian-haired, Belle Botsford is known to have studied violin in Paris. She performed at Amherst College in 1890 and in Ann Arbor in 1891, where she was described as "an interesting young violinist." She founded a touring musical company, the Belle Botsford Concert Company, whose performances were noted in The Musical Record of 1893. Botsford married Canadian poet, musician, and public servant Duncan Campbell Scott in 1894, the two having met when he accompanied her on the piano in a concert in Ottawa. If this painting portrays Belle Botsford, and if she is about 10 years old, that would date the work to c. 1878.

There are many open questions about the authorship of this charming work. Stylistically it could certainly be by William Morris Hunt as suggested in the inscription, but the timing seems improbable if this is truly Belle Botsford and the setting is Paris. Hunt died in 1879, and he was busy with commissions in the United States in the time prior. The monogram referenced above appears to read "OT." While it is tempting and even reasonable to suggest Henry Ossawa Tanner based on style, the format of the monogram does not conform to any that Tanner was known to have used, and the artist did not go to Paris until 1891.
Estimate $1,500-2,500

Various annotations on the reverse indicate that the work was conserved and varnished in August 1975.