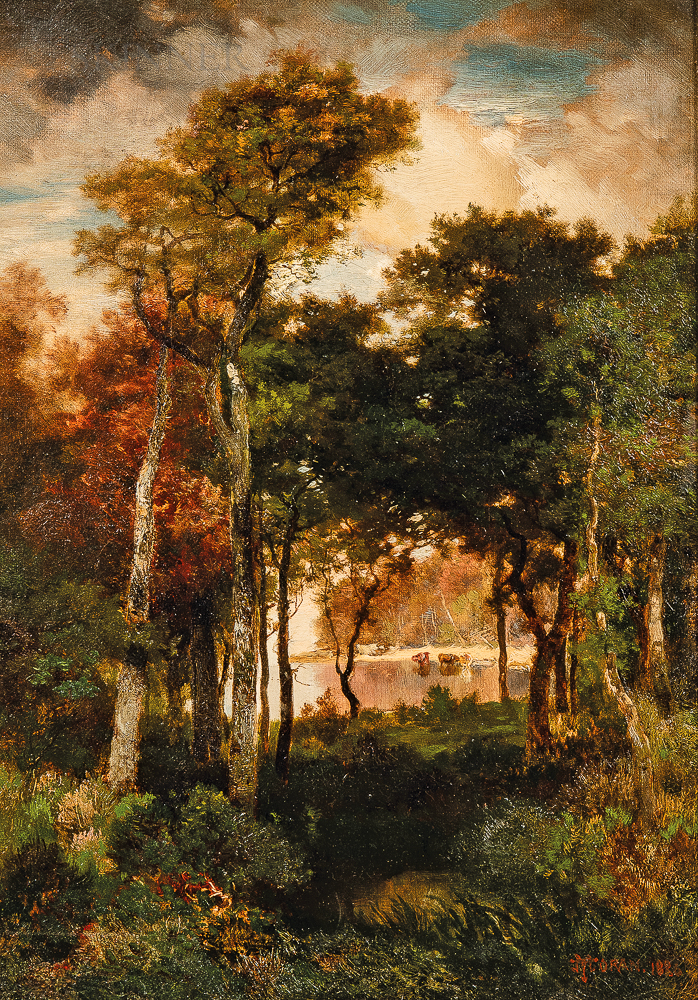 N.B. Thomas Moran is one of the most important late 19th-century American landscape painters. Born in England, Moran and his family settled in Philadelphia in 1844, where he grew up without formal art training. He was apprenticed to a wood engraver as a teenager, and this experience informed his understanding of light and dark contrasts, used with such stunning effect in his mature oils. Philadelphia offered a rich artistic milieu, and the Moran family actually produced three artists: Thomas, his older brother Edward, who was a noted marine painter, and his younger brother, Peter.

As a young artist, Thomas Moran was greatly influenced by the atmospheric landscapes and seascapes of Joseph Mallord William Turner. He was first introduced to these works by Philadelphia artist and mentor James Hamilton. Later Moran traveled to England with his brother, Edward, to study and copy the works of Turner as well as those of John Constable.

Moran was an avid traveler, making four trips to Europe, including time in England and visits to Venice, as well as frequent painting trips to the American West. Moran painted in the Yosemite Valley, in the Sierra Nevada and Lake Tahoe areas, and in the Teton Mountains of Wyoming, where Mount Moran was named in his honor. The lure of the West was strong, and Moran began spending summers in California by 1916.

Moran lived and painted on the East Coast for much of his career. He had a studio in New York City, and purchased a plot of land in East Hampton on Long Island in 1882. He built a summer home and studio here, as the village reminded him of the English countryside. Georgica Pond, the view presented here, was only minutes from Moran's Long Island studio, and it was a subject that he returned to multiple times during the 1880s. The play of light and dark that he learned as a young printmaker is visible here as we spy through a dark autumn wood to the bright sunlight reflected off of the pond's surface and shoreline. Cows drink peacefully at the water's edge while clouds drift through a changeable sky above, reminiscent of Constable.

This work will be included in Stephen L. Good and Phyllis Braff's forthcoming catalogue raisonné of the artist's work.
Estimate $35,000-45,000

Under ultraviolet light there is some uneven, greenish, varnish in lower portion, especially in the dark areas. a few tiny dots of retouch along the top center edge near the frame.