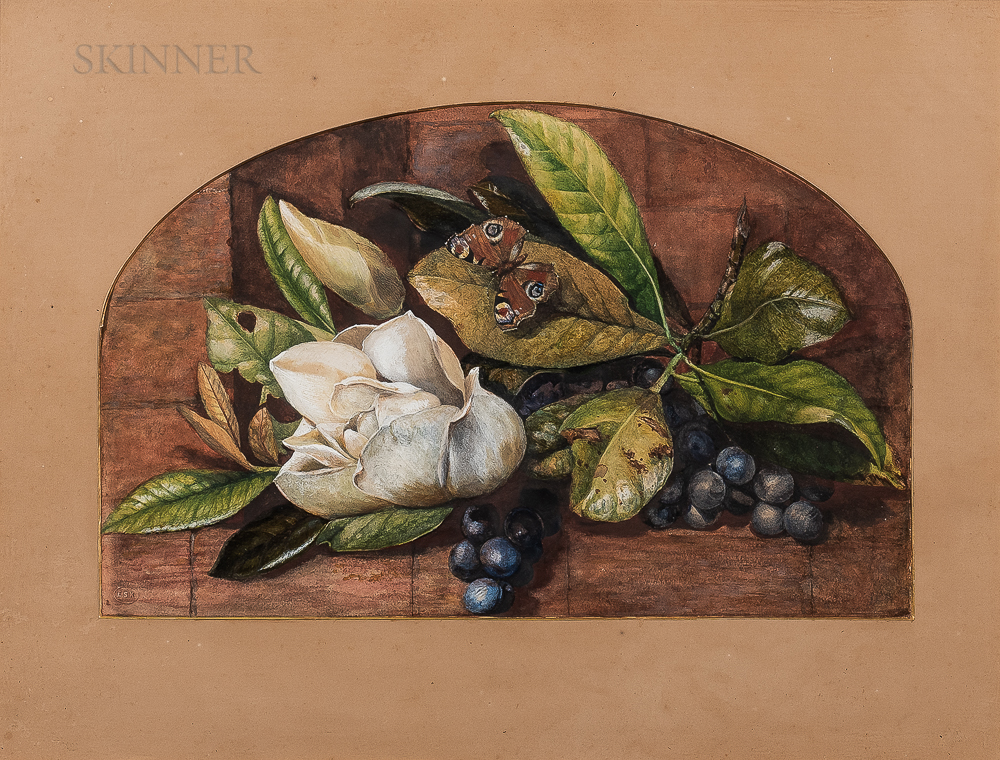 Grapes and Magnolia
Initialed "LC" in pencil l.r., with an embossed collector's stamp "E.S.K." within an oval l.l., attributed and inscribed "...painted at Rax. Bridport/by/Louisa Colfax/about 1865" on a handwritten label affixed to the frame backing cardboard.
Watercolor and gouache on paper, sight size 12 5/8 x 19 3/4 in. (32.0 x 50.3 cm), framed with an arched mat.
Condition: Subtle rippling, not examined out of frame.

N.B. The label referenced above describes this work as having been created at Rax, Bridport. Built in the later part of the 18th century, the manor house Rax was acquired in 1827 by Thomas Collins Colfox, a prominent Bridport Unitarian, merchant, and alderman. After his death in 1835 the house was considerably altered and enlarged by his widow, who died in 1858. T.C. Colfox's son, William, married the daughter of Andrew Abbot, partner in the pottery firm of Turner, London. It is not known if the Louisa Colfox credited with this watercolor (c. 1865) was the wife of William Colfox or, perhaps, a daughter.

The collector's mark may be that of Edward Sherard Kennedy, London, active in the second half of the 19th century (L.907b), although Lugt records the initials as perforated letters rather than embossed.
Estimate $600-800

Out of the frame the sheet measures 15 5/8 x 22 1/8 inches, and is glued to the facing mat on the recto at numerous points around the edges. There are minor losses to sheet at all corners, plus minor additional losses. From what can be seen (which is, of course, limited) it appears the glue is to margins and little or none of the composition is obscured by the mat.

There is an old wooden backing beneath the paperboard backing.