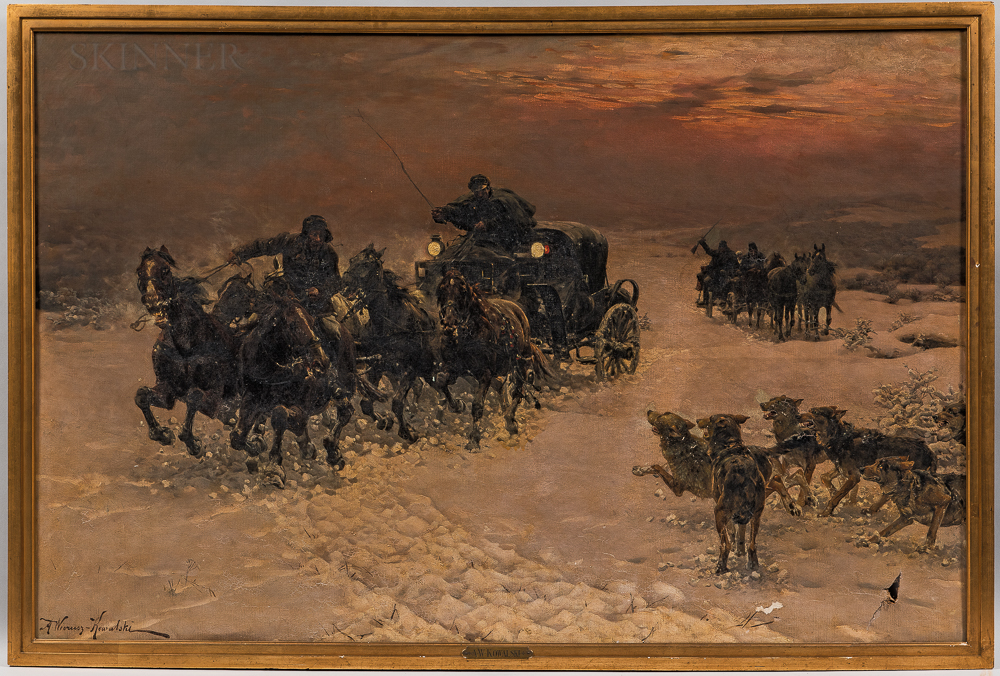 Provenance: From the collection of Martha Clark Shelden, then by descent to the current owners. While there is no documentation, the family conjectures that the original family member who would have purchased the painting was a distant aunt named Mary Clark Thompson (1835-1923) of Canandaigua, New York. She and her husband were world travelers, collectors, and benefactors to Williams College.

N.B. Alfred von Wierusz-Kowalski (Alfreda Wierusza Kowalskiego) was born in the small Polish village of Suwalki. Most of the residents, including his family, were of meager means, and the surrounding countryside was punctuated with woodlands and lakes. At the age of 16 he moved with his family to the relatively cultured city of Kalisz. Within three years he had settled in Warsaw, where he began drawing classes and visiting the studios of the artists of the city, and of Wojciech Gerson in particular. His training ultimately took him to the Art Academy in Dresden. If the academy's training was less than stellar, the surrounding area exposed him to the great 17th-century Dutch and Flemish masters. In 1873 he moved to Munich to study, and it is there that he spent much of his career, although it is clear, as in the work presented here, that his subjects were often aligned with the rural Polish life of his childhood. Initially Wierusz-Kowalski favored subjects of the so-called late rococo style: courtly figures in 18th century garb, but these slowly shifted toward equestrian subjects of hunters and warriors. It was not until about 1880 that his style reached its maturity with the more typically Polish subjects as seen here.

The artist heightens the dramatic subject by placing the lead carriage at a strong diagonal as the coachmen urge the horses onwards into our space to escape the wolves. In the distance the second carriage comes at a contrasting angle, and is driven by a coachman with a rifle, hopeful aiding in the escape. In the distance the sun is setting in a brilliant display of color. This seems keyed to a climactic escape, but is also fleeting, and a reminder of the darkness to come. The emptiness of the distant landscape, though beautiful, indicates that no other help is likely to come. The final outcome of this narrative is far from certain.

The elements of the composition illustrate Wierusz-Kowalski at the height of his powers, although the tastes and styles of the art world were quickly changing around him. Although he was highly praised and collected in his day, by the end of his career his style was seen as academic and anachronistic.
Estimate $175,000-225,000

Frame measures 44 1/2 x 66 inches. The work is described as "framed in a liner," by which we mean that this frame was once more elaborate, but the outer, more decorative part of the frame is now gone, so just the simple inner section of the frame closest to the canvas remains.

Several areas of alligator cracking, scattered craquelure throughout, including some areas of loss especially in the wolves, in the rider on the front horse, and in the front carriage. Images show these in detail.

Note relating to online images: The subtleties of the light in this painting were difficult to capture in photographs. We have included two views of the work in its frame, one too dark and dense, the other too bright. The actual feeling is somewhere in between.