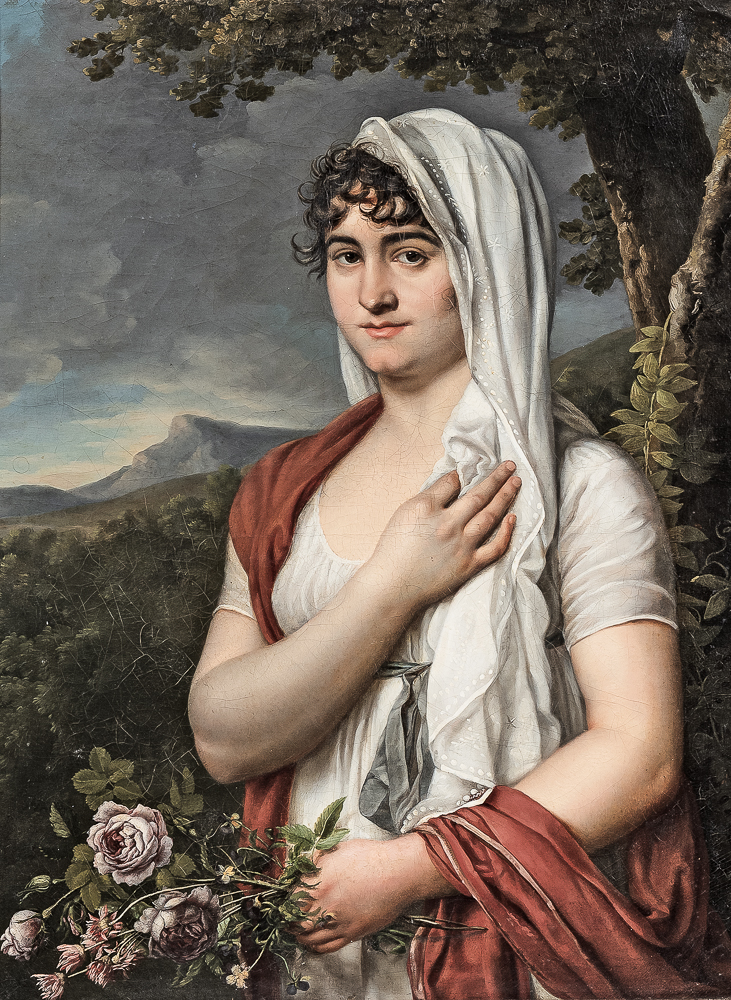 Provenance: Presented to Nikolai Kozlov, the father of the consignor, as a house-warming gift in 1967 to celebrate the building of the Kozlovs' permanent home in the United States. Nikolai Kozlov, a Soviet refugee, had befriended the giver, a Finn, in Europe after WWII. They both immigrated to the Washington DC area and remained friends for life.

N.B. Little is known about J. Moriès, including the artist's first name. Born about 1760, he was a painter of portraits and historic subjects, who died c. 1812 at Saint-Germain-en-Laye outside Paris. However, it is documented that Moriès (sometimes spelled Moriez) was a student in the atelier of Jacques-Louis David from 1793 to 1799. He is mentioned often in a seminal work on David by Etienne-Jean Delécluze, Louis David, son école et son temps (Paris: Didier, Libraire-Éditeur, 1855), a link to an electronic version of which appears below. The author, who was a fellow art student, described Moriès as handsome and aristocratic, and as a favorite among the other students for his kindness and sense of fairness. Moriès was over 30 years old when he entered David's atelier, having already had a career in the military. He was not as gifted as some in the studio, but his greatest aspiration was to be a painter, and he worked night and day, it was said, to make up for all the time he had lost as a soldier. Once, while critiquing his students, David looked at Moriès's easel and remarked, "Allons, courage, mon cher Moriès …don't be discouraged. It is like in combat." Moriès replied softly and humbly to the master, "You are correct, monsieur David, one must win or die." What if any works are extant by Moriès, beyond the portrait at hand, is not known, but he has been credited with making a drawing of the French crown-prince (Dauphin), imprisoned in the Bastille in 1794.

The lining is adhered with glue and/or resin. There are some very minor dots and dashes of retouch. Framed dimensions are 39 x 31 x 2 in.