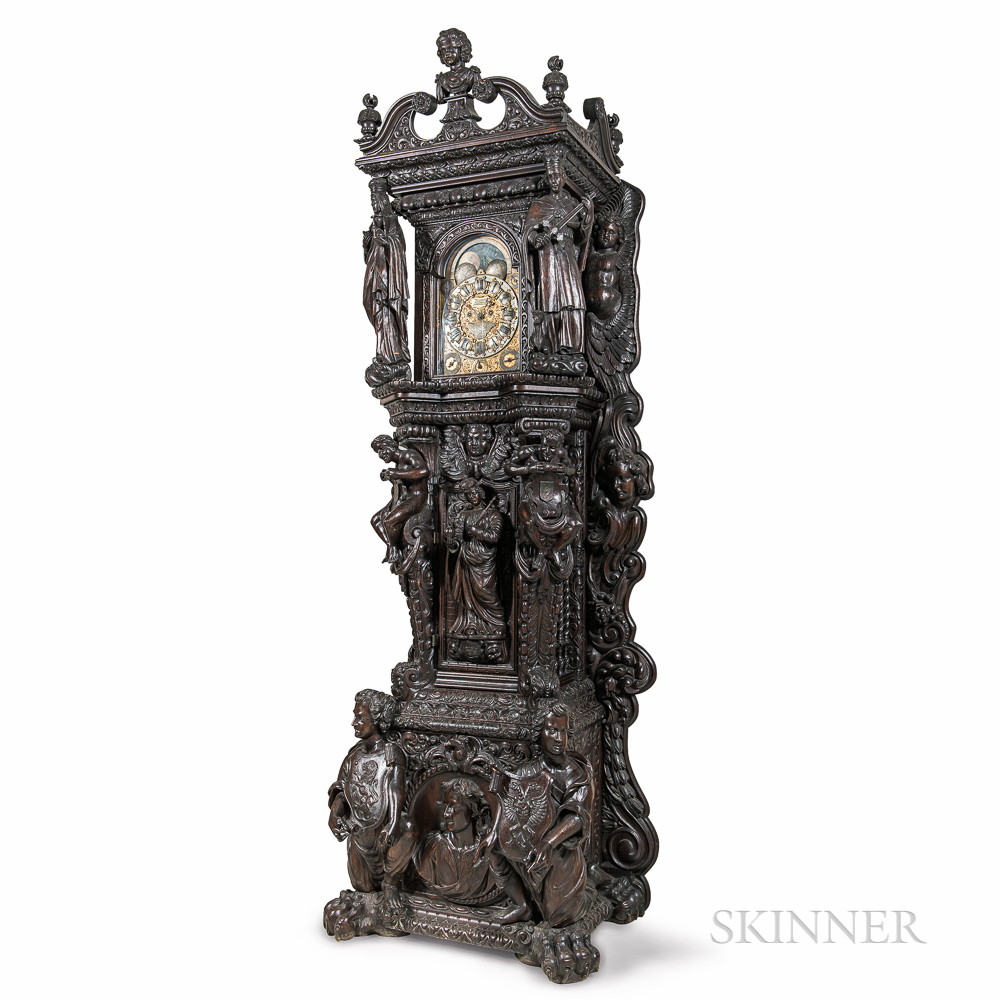 Prior to its coming to Vermont, the clock adorned the interior of the Grosvenor Hotel in Chester, England. Percival W. Clement (1846-1927; Governor of Vermont, 1919-1920) admired the clock and made arrangements to purchase it in 1914, originally intending to place it in the Hotel Woodstock in New York City, of which he was then owner. Transport to the U.S. was delayed because of World War I, and by the time it could be shipped in 1920, Clement no longer was owner of the Hotel Woodstock, but as he was then serving as Governor of Vermont, the clock was installed in the Governor's chambers. It was subsequently moved to the Reception Room in the State House, where it remained on loan until 1944, when Mr. Clement's heirs formally donated it to the Vermont Historical Society. The clock, which measures 12 feet high, 4 feet wide, and 3 feet deep, has an ornately carved case made of dark polished English oak. It has been proposed by earlier researchers that this clock is a commemorative piece for Queen Anne, who ruled from 1702 to 1714. Her carved figure features prominently on the door, along with figures of the Duke of Marlboro, Archbishop of Canterbury, court jesters bearing coats-of-arms, and King George I, who succeeded the throne upon Queen Anne's death. Busts of Milton and Homer are displayed on the sides. A cupid figure, a customary ornament of time pieces, perches on the top of the hood. Other carved figures and scenes have not been positively identified.

The clock was designed to strike the hours and quarter-hours with Westminster and Cathedral chimes. Also at each hour a tune is played on a music box mechanism; it plays a different tune for each day of the week. Definitive information about the manufacture and provenance of the clock prior to its ownership by the Hotel Grosvenor is incomplete. Horologists have estimated that the clock dates from the latter part of the 19th century. The date MDCCXX (1720) carved on the base has occasionally misled enthusiasts; it is not the date of manufacture but rather a commemorative marker relating to the reign of Queen Anne. The clock was displayed in three spaces in the Capital Complex. It was first displayed in the society's quarters on the first floor of the Supreme Court Building at 111 State Street. In 1961 it was moved down the street to the State Administration Building at 133 State Street. Ten years later it was moved into the Pavilion Building at 109 State Street where it was displayed in the "Victorian Lobby," a replica of the Pavilion Hotel's lobby, appropriate to its original sitting in a hotel lobby in England. The collection includes correspondence, memoranda, news clippings, photographs and other materials documenting the provenance, features and history of the Clement Clock on display in the State House and then donated to the Vermont Historical Society in 1944 by the estate of Percival W. Clement (1920-1944). It includes papers documenting the purchase of the clock by Clement and its shipment to Vermont in 1920; files documenting historical research on the clock undertaken by Mary G. Nye, Editor of State Papers (chiefly 1930s); Philip Elwert, VHS Curator (1980-1982); and others. It also includes information on various repairs undertaken on the clock in the 1950s and 1970s.
Estimate $20,000-40,000