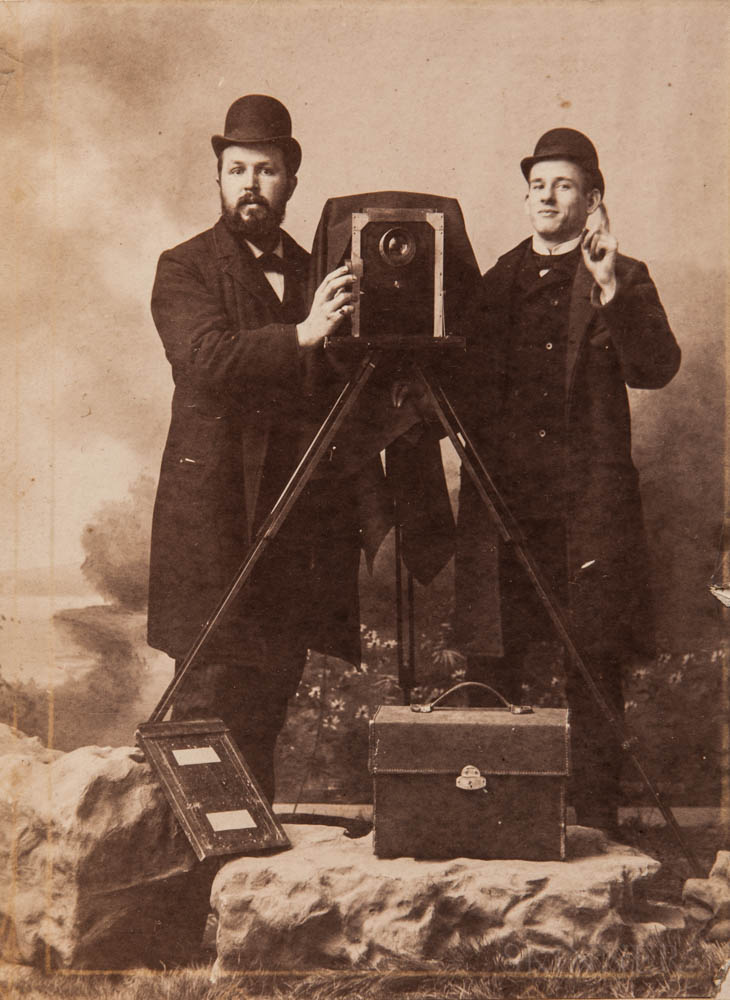 Photographs, American, c. 1891. 110 black-and-white and cyanotype photographs mounted on both sides of twenty-five stiff album pages, in varying sizes, the majority (eighty) measure approximately 7 1/2 x 9 1/2 in.; depicting a variety of subjects, the majority taken in Scranton, Pennsylvania, and Binghamton, New York, with smaller numbers taken in Princeton, New Jersey; showing a photographer and his assistant in their studio in Scranton; personal homes in Troy, Binghamton, and Utica, New York; the photographer's studio and darkroom in Binghamton with four seated workers; a stone quarry; a one-room schoolhouse in Scranton; haying on Staten Island; the laying of the cornerstone of the New York State Masonic Home in Utica, New York, on May 21, 1891 by Grand Master John Vrooman; the workmen and factory floor of the Crandal & Stone Carriage Hardware Factory in Binghamton; a railroad freight dock in Weehawken, New Jersey; a spiral at the Inter State fair in Elmira, New York; a bank in Montclair, New Jersey; a "Group of Tramps berry picking on a farm at Pensawken, NJ"; large family groups; railroad engines; school-children; beach-goers on Staten Island; tugboats in the water off Camden, New Jersey; a rural family before their log cabin with ox team in Binghamton; trestle railroad bridges; the electric light station in Scranton; a fire in South Amboy; railyards; livestock photos; an art gallery; and many other interesting images of people and places in the area; a few photos marked Alexander Brothers, Merchantville, New Jersey, the majority unmarked; dusty, fly specking, fading, and other surface damage to varying degrees.
Estimate $300-400