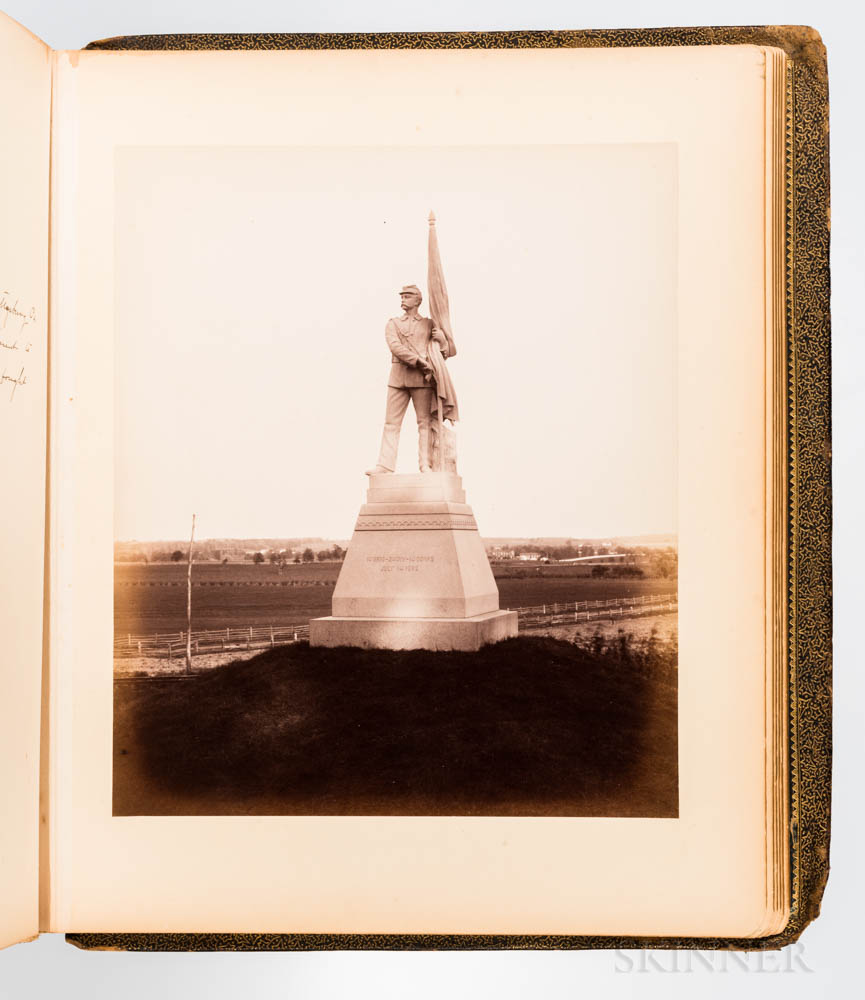 Recollections of the Thirteenth Massachusetts Regiment, Photo Album, Post 1885. Large format leather album containing fifty-one large- and medium-format albumen photographs mounted on heavy album pages, one or two to a page; the album documents a trip south made by five members of the 13th who fought in Civil War: Lieutenant Augustus Newman Sampson (1839-1901); Lieutenant Colonel Charles H. Hovey (b. circa 1830); Colonel Samuel Haven Leonard (1825-1902), the 13th's original commander; and ; Lieutenant Robert B. Henderson; along with a photographer and a small group of assistants, retracing their engagement in the conflict; the album begins with a photograph of Boston Harbor and continues with images of the following subjects: the Williamsport, Maryland home occupied by Colonel Leonard; the Taylor House, and its former proprietor "a Union man and a great admirer of the 13th regiment"; arreas along the Ohio canal in Williamsport, and the spot where the army crossed the Potomac in February 1862; Hagerstown and Hancock, Maryland; Col. Leonard's headquarters in Martinsburg, Virginia; Dunker's Church "scene of desperate fighting at the Battle of Antietam," with four veterans standing outside; "Bloody Lane" at Antietam; Col. Leonard's headquarters at Bunker Hill, Virginia; Winchester, Virginia; the Shenandoah River with the photographer and his assistants and the other travelers aboard a ferry boat; Snickers Gap (several images); Snickersville; Harper's Ferry; John Brown's Fort; Maryland Heights; the Gettysburg monument dedicated to the 13th; other scenes around Gettysburg, including a barn occupied by Confederate sharp shooters; the scene of Pickett's Charge; and a number of buildings related to Gettysburg; two images of the five veterans before and after their lunch are particularly engaging, Colonel Leonard naps with his head on a picnic basket; front board detached, the album 12 x 10 in.
Estimate $300-500