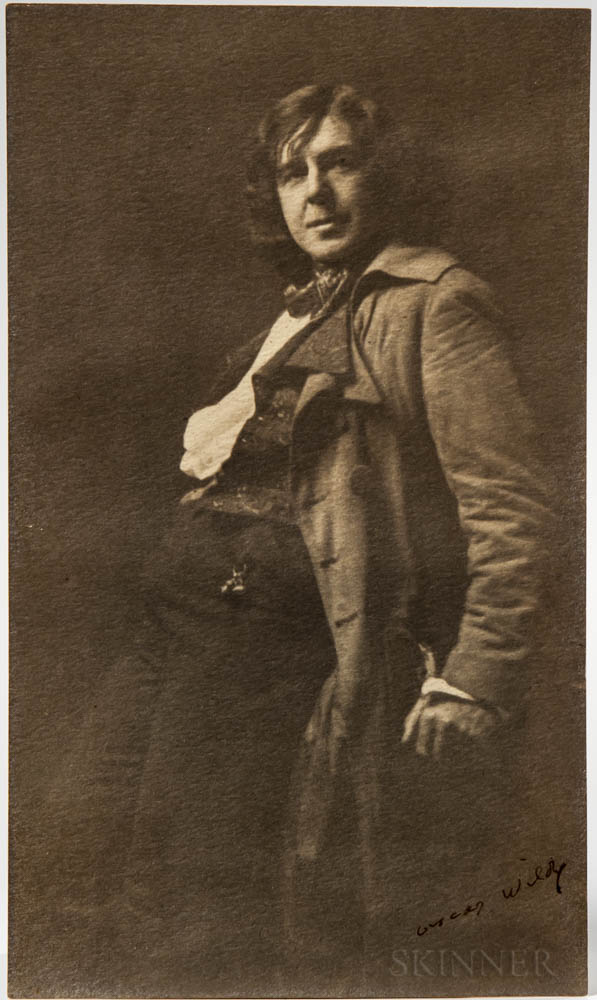 In 1882, Oscar Wilde visited the United States and Canada for the first time on a lecture tour. Napoleon Sarony's New York photographs of the author, taken shortly after his arrival, have come to define Wilde's lasting image. In March 1882, the twenty-seven year old poet and future playwright arrived at the Palace Hotel in San Francisco to deliver several lectures in the city. Wilde's personality and style brought him through a number of memorable experiences in the City by the Bay, including a visit to the exclusive Bohemian Club on April Fool's Day where legend has it that Wilde either bested his hosts' challenges to his learning and scholarly insight, or drank them under the table, or both. Another actor, John Howson, appearing in a production of Gilbert and Sullivan's aesthetic parody Patience, traveled aboard the poet's train for the journey West, dressed as a Wildean character, greeting fans and curiosity-seekers who came to catch a glimpse of the 6' 3" Irish aesthete. This photograph evokes the hijinks that accompanied Wilde's tour. In Corinne, Utah, a group of forty people dressed in imitation of Wilde appeared on the railroad platform seeking the source of their inspiration. This hitherto unpublished period photograph purchased from a San Francisco book dealer in the 1970s offers a vivid glimpse into the character of a tour that would become legend. (Special thanks to John Cooper's Oscar Wilde in America: https://www.oscarwildeinamerica.org/)
Estimate $1,000-1,500