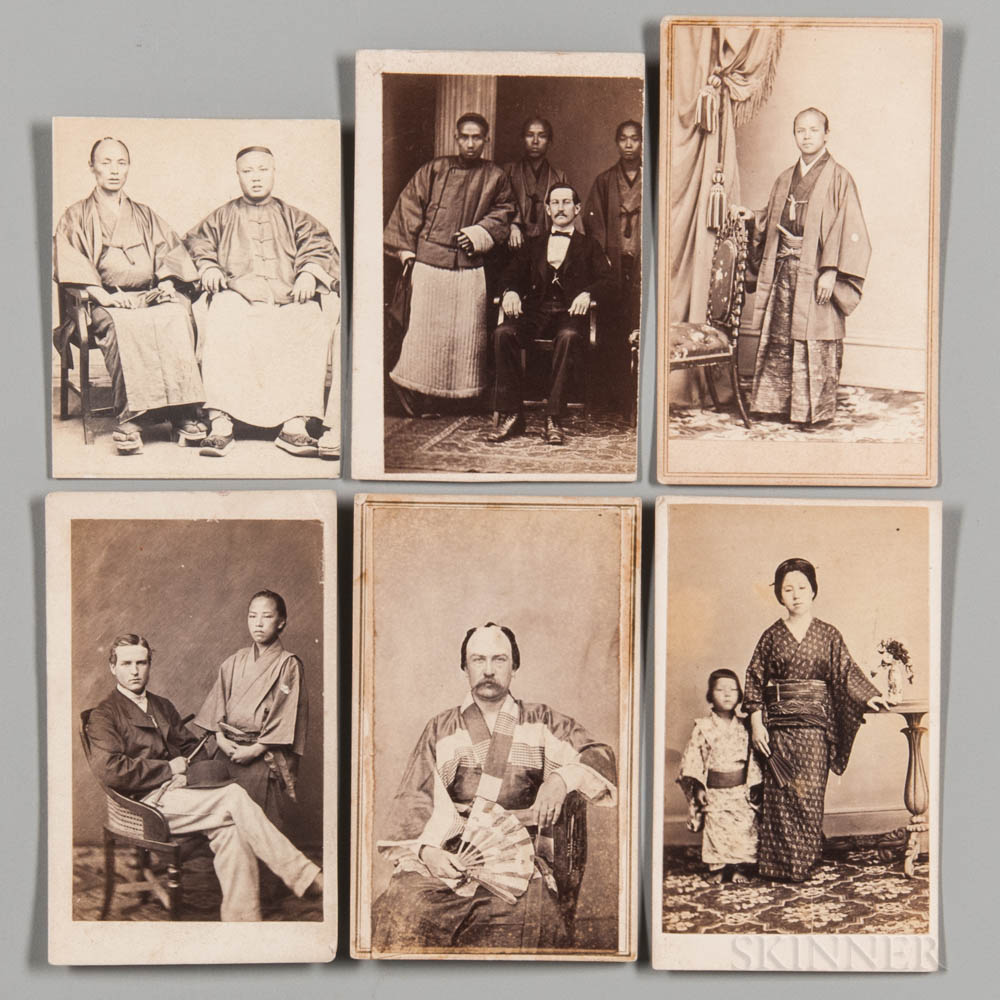 Van Reed, Eugene (1835-1873) and Yabe Kisaboro (b. circa 1845) Seven Carte-de-visites. Including the following CDV's: Kisaboro in formal kimono taken in a San Francisco studio, c. 1865, inscribed in pencil on verso, "Yabe Kisaboro, my boy for nearly 4 years," with another inscription in Japanese, lower right; Kisaboro's wife and child; a western man who may be Van Reed in full Japanese dress and hairstyle, seated in a kimono, holding an open fan; Van Reed in a western suit, seated with three standing Asian men, one in Chinese dress, two in Japanese dress; two Asian men seated together, one in Japanese dress, one in Chinese dress; a western man seated with an adolescent Asian boy in a kimono standing by his side; [and] an image of Yokohama; all approximately 2 3/4 x 4 in. (7)

This group of images is presumed to be the former the property of Van Reed himself, based on the following. Van Reed was the Kingdom of Hawaii's first consul in Japan, and brought the first group of Japanese immigrants, or Gannenmono, to Hawaii. "Yabe Kisaboro, a Japanese youth of about twenty, was brought to this country by Mr. Van Reed in 1865, upon a tour of observation of its people and resources. He was not of the ruling class in his own land, but was highly intelligent, well educated and of most attractive character and manners. He had for four years been Mr. Van Reed's teacher of the Japanese language, and there existed a strong bond of friendship between them. [...] In gaining such experience he did so at the risk of his life, there having been at that time but little abatement in the rigorous restrictions of the Japanese government upon the departure of its subjects from the Empire. Leaving by way of Shanghai and Hong Kong, and visiting Canton en route, he accompanied Mr. Van Reed to San Francisco. Being too ill to accompany him East, Mr. Van Reed sent him to New York in the care of a firm engaged in the China trade." Transactions of the Historical Society of Berks County, vol. II, Reading: Owen, 1910, 294 ff., "The Earliest Japanese Visitors to Reading," by Louis Richards.
Estimate $200-300