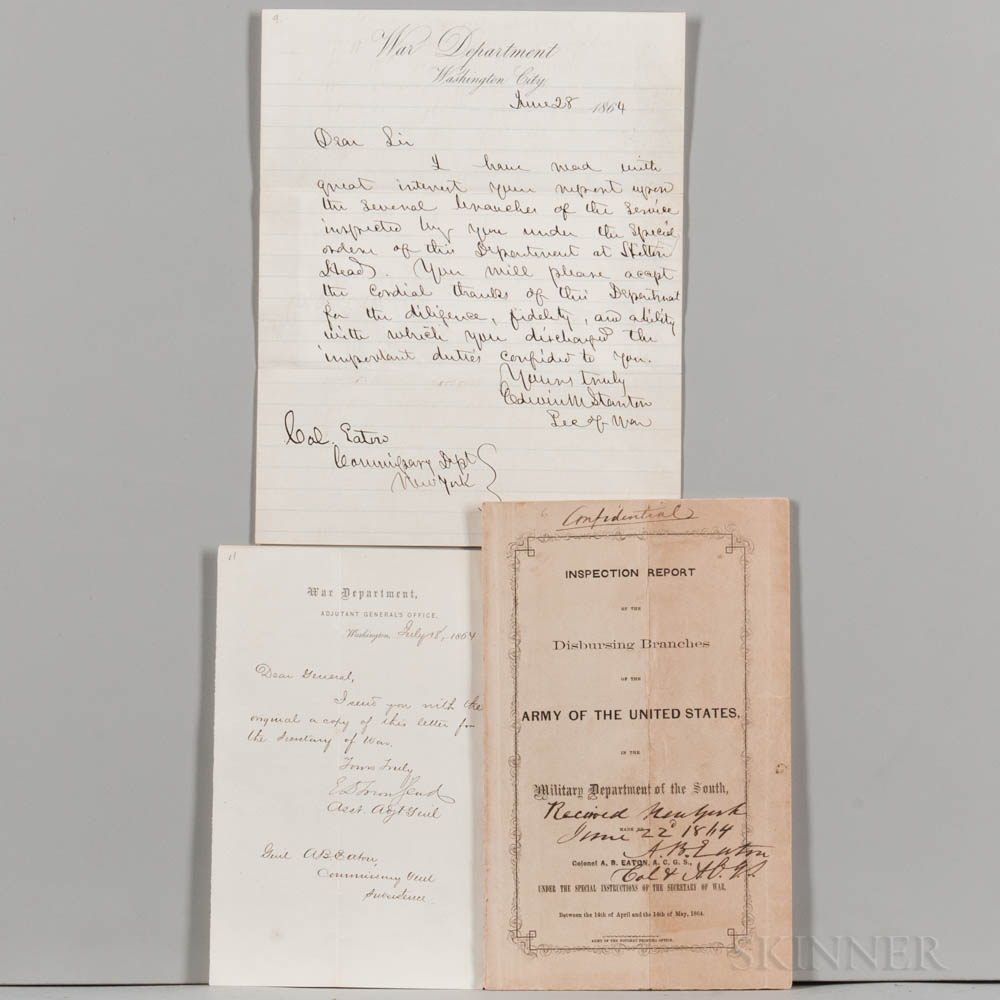 Eaton, Amos Beebe (1806-1877), Edwin M. Stanton (1814-1869), and Edward Davis Townsend (1817-1893) Confidential Inspection Report Pamphlet and Three Letters, 1864. Inspection Report of the Disbursing Branches of the Army of the United States in the Military Department of the South, Made by Colonel A.B. Easton, A.C.G.S., under the Special Instructions of the Secretary of War, Between the 14th of April and the 14th of May, 1864, Army of the Potomac Printing Office, 1864; octavo pamphlet in original printed paper wrappers, marked "Confidential" in manuscript at the top, and signed by Eaton, as received, June 22, 1864; [together with] autograph letter signed by James Allen Hardie (1823-1876) and original mailing envelope pasted inside the front cover and on verso of title page, to Eaton, the letter stating that he had received Eaton's report, "You may know that I think the report valuable, since I had it printed confidentially for the eye of the Secretary himself, who has read it. I sent it to Gen. Halleck for his review. The report has not been published. You need fear no issue of extra copies. I send you one. I had the report printed on a War dept. hand press, a few pages set up at a time & struck off--then the same type used again &c. So you can see that there can be no extra copies procured or retained by anybody. I like the report very much."; [together with] autograph letter signed by Stanton, 28 June 1864, single page of War Department letterhead, to Eaton, thanking him for his work on the report; [and] secretarial letter signed by Townsend on War Department letterhead, from the Adjutant Generals Office, 18 July 1854 to Eaton, returning the original copy of the pamphlet and Stanton's letter.

The investigation in question concerned Major General Quincy Adams Gilmore's mismanagement of water transportation while he served in South Carolina. "The opinion is nearly universal among officers long in the Department of the South, as well as among civilians resident there, that there has for a long time existed very bad management of the water transportation [...] this has arisen from the fact that General Gilmore, however brilliant as an engineer or successful as a commander, is not an economist."
Estimate $700-900