Boston, Revere Beach and Lynn Railroad, a Large Archive of Photographs and other Material. 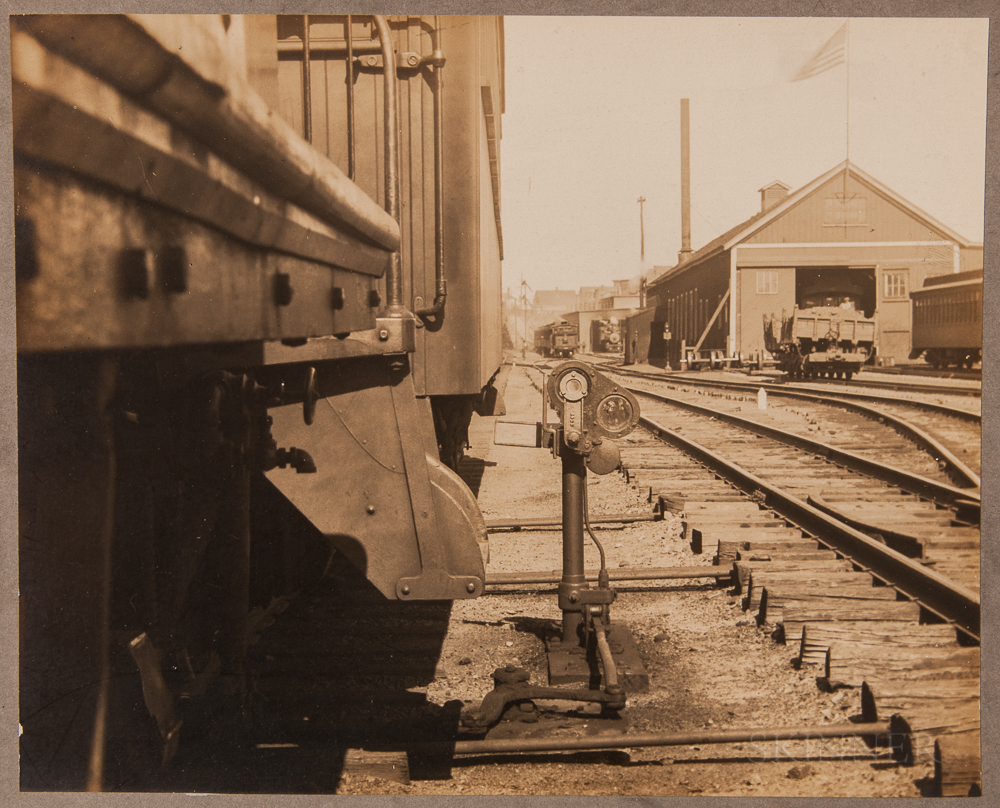 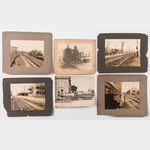 Boston, Revere Beach and Lynn Railroad, a Large Archive of Photographs and other Material. Including: thirty-three albumen prints on mounts of which approximately ten are stamped and signed with detailed handwritten identification by photographer David W. Butterfield (1844-1933), others with inscriptions or stamps from other photographers, most taken between 1906 and 1920, depicting train tracks, adjacent buildings, stations, and crossing in Winthrop, East Boston, Lynn, Revere, and Orient Heights; approximately twenty-five small-format black-and-white photographs of railroad company buses, engines, properties, stations, and employees from the 19 'teens; approximately fifty medium- to large-format black-and-white photographs of engines, stations, buildings, and storm damage, most dating from the 1920s and '30s; approximately fifty 9 1/2 x 7 1/2 in. black-and-white photographs from the 'teens, made in a grade crossing survey, depicting various private homes, business, and railroad properties along the railroad line each with handwritten annotations recording the name of the property owner, the street, date the photo was taking, and direction, taken on Butler Avenue, Saratoga Street, Bennington Street, Bayswater Street, Breed Street, Ford Street, among others, all in Orient Heights; six signs on card announcing fare and schedule changes, and other railroad business; several handbooks of the rules and regulations from 1891 and 1913; a binder containing photographs of the railroad's twenty-six locomotives, most in multiple views, with other photos of ferries, snow plows, baggage cars, buses, flat cars, and cinder cars; a scrapbook from c. 1870-1890 containing news stories about the Boston, Revere Beach and Lynn Railroad and some printed posters; [and] other material, including a photograph of the last steam train's run in 1928; sizes and condition vary, a unique archive that should be viewed in person.

The Boston, Revere Beach and Lynn Railroad was a narrow-gauge rail line servicing communities just north of Boston that operated between 1875 and 1940. Up until 1928, steam engines rode the three-foot wide tracks, bringing residents of the North Shore communities into Boston for work and allowing city dwellers quick and cheap beach excursions. In 1914, at the height of its popularity, the rail system, which included a loop through the town of Winthrop, carried seven million passengers. The railroad also operated buses and a ferry to Rowe's Wharf in Boston. A successful transition to electric train cars came in 1928, but the line was subject to weather-related damage as much of the track ran along the shoreline. Financial setbacks associated with the Depression, along with the rise of personal automobile use caused the railroad to file for bankruptcy in 1937. Unable to find a buyer, the owners abandoned the business in 1940. Sections of the rail line were taken over by the Massachusetts Bay Transportation Authority's Blue Line in the 1950s, some trains are still running along the same routes, and a bus line services Winthrop. Because of the dissolution of the company and the subsequent destruction of other remaining archives, little material remains to document the existence of this once very successful public transit system. Additionally, the photographs in this collection make accurate record of the neighborhoods, businesses, and buildings of these North Shore towns in the first twenty years of the 20th century, many of which no longer exist.
Estimate $1,000-2,000