Newton, Sir Isaac (1643-1727) Opticks: or a Treatise of the Reflexions, Refractions, Inflexions and Colours of Light. 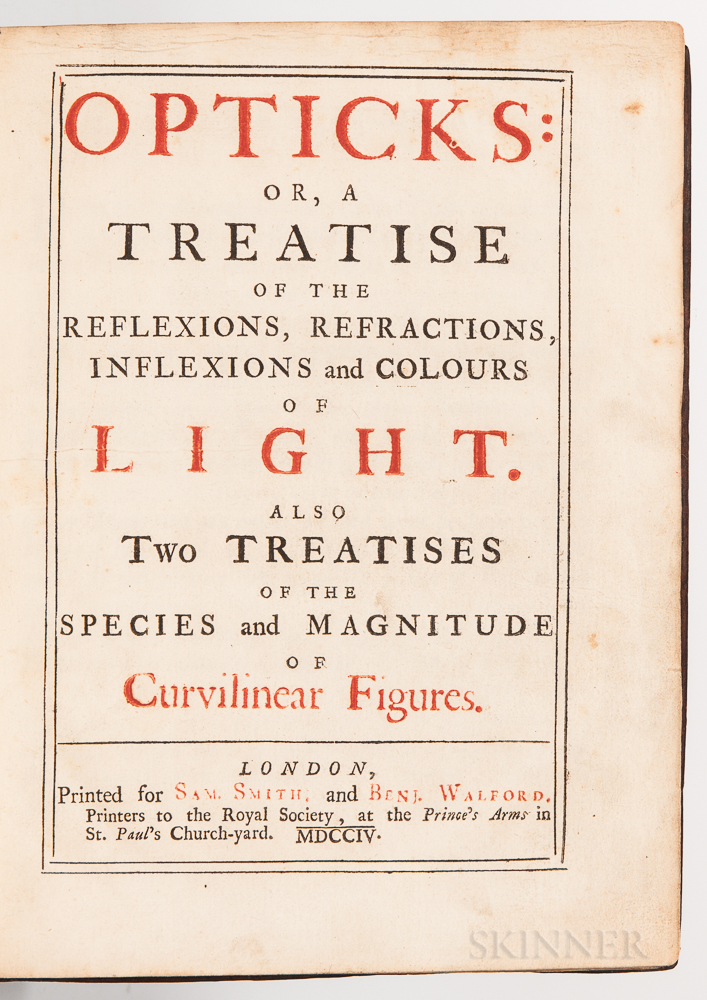 Newton, Sir Isaac (1643-1727) Opticks: or a Treatise of the Reflexions, Refractions, Inflexions and Colours of Light. London: Printed for Sam. Smith, and Benj. Walford, 1704. First edition, first issue, without mention of Newton in the imprint, quarto, title page printed in red and black, illustrated with nineteen folding engravings, bound in full contemporary paneled and speckled English calf, carefully rebacked and recornered (possibly by Bernard Middleton), purchased from Dawson's in the late 1970s, some occasional foxing to contents, generally crisp, 9 1/2 x 7 1/4 in.

"Newton's Opticks did for light what his Principia had done for gravitation, namely, placed it on a scientific basis." (Babson, p. 66) In this work, with his characteristically formidable scientific approach, Newton studies the qualities and properties of light, providing an analysis of the spectrum of sunlight in which he determines degrees of refraction associated with different colors, a treatment of the color circle, the rainbow, Newton's rings, and a description of the reflecting telescope, Newton's own invention.

Dr. Adrian Pollock was born in Stafford, England, and raised in Weston-super-Mare. He earned a Master's Degree in the Natural Sciences from the University of Cambridge at Queens and a Ph.D. from Imperial College of London in 1968. After moving to California in 1975, Dr. Pollock began collecting rare books in the history of science, visiting book stores on trips home to the U.K., and purchasing from international catalogs when in the States. Newton was a special favorite, as the two scientists shared a field and an alma mater. Dr. Pollock's book collection made another trip when he and his wife moved with to Yardley, Pennsylvania in 1986. There they settled and their family grew to include two sons.

Dr. Pollock was a leader and mentor to younger scientists in his field: non-destructive acoustic emission testing. Acoustic emission differs from other nondestructive material testing techniques. Rather than supplying energy to the tested object, acoustic emmission is an approach that listens for the energy released by the object, and addresses the dynamic processes (changes) in that material. He worked for Mistras Group in Princeton Junction, New Jersey for thirty-four years. For other books from Dr. Pollock's collection (see lots 1077, 1087, 1103, 1125, 1135, 1136, 1137, 1142, 1144, 1197, 1198, and 1199) or search for his name in the online catalog.
Ex libris Dr. Adrian Pollock
Estimate $30,000-50,000