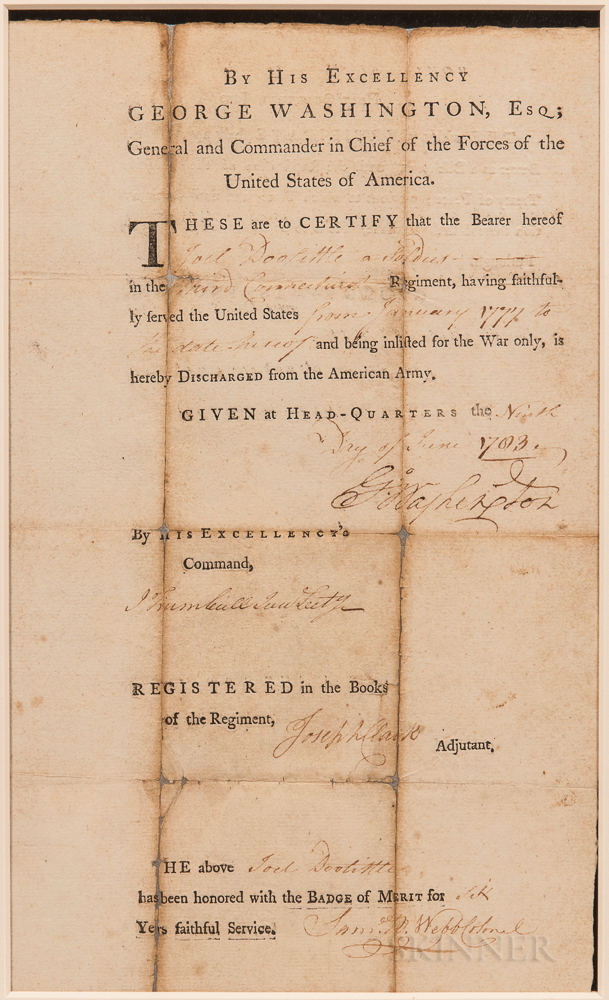 Washington, George (1732-1799) Certificate of Military Discharge for Joel Doolittle (1753-1813) with Badge of Merit, Signed, 9 June 1783, Typographically printed document fulfilled by hand, signed by Washington as Commander-in-Chief of the Continental Army, countersigned by Jonathan Trumbull, Jr., (1740-1809); registered in the books of the regiment by Adjutant Joseph Clark (1751-1813); additionally signed by Colonel Samuel Blachley Webb (1753-1807) in the Badge of Merit section; with printed paragraph on verso indicating that the discharge is contingent on the ratification of the peace treaty and should be considered a furlough until the treaty is signed; with manuscript docket in brown ink on verso; fragmentary along folds, paper repairs, in a modern double-glazed frame, 12 3/4 x 7 3/4 in.

Joel Doolittle, son of Samuel and Margery (Andrews) Doolittle, was born in Wallingford, Connecticut, on April 25, 1753. He was in the process of studying for a medical degree in New Haven when the Revolutionary War began. Joel and his brother Thomas enlisted in the Continental Army in New London in 1777. His Regiment was with Washington at Germantown, Valley Forge, Monmouth, White Plains, and Redding. Doolittle was transferred from the 1st to the 5th Connecticut in 1781 and served under the Marquis de Lafayette in Virginia. He was subsequently transferred to the 3rd Connecticut regiment, from whence he was discharged after six years of service to his country. After the war, Doolittle married Huldah Lucas (1787). They had five children together, and lived in Canajoharie and Fort Herkimer, New York. Doolittle died during a trip to Sacketts Harbor in 1813. Consigned by a direct descendant, Joel Doolittle's four-times great-grandson.
Estimate $5,000-7,000