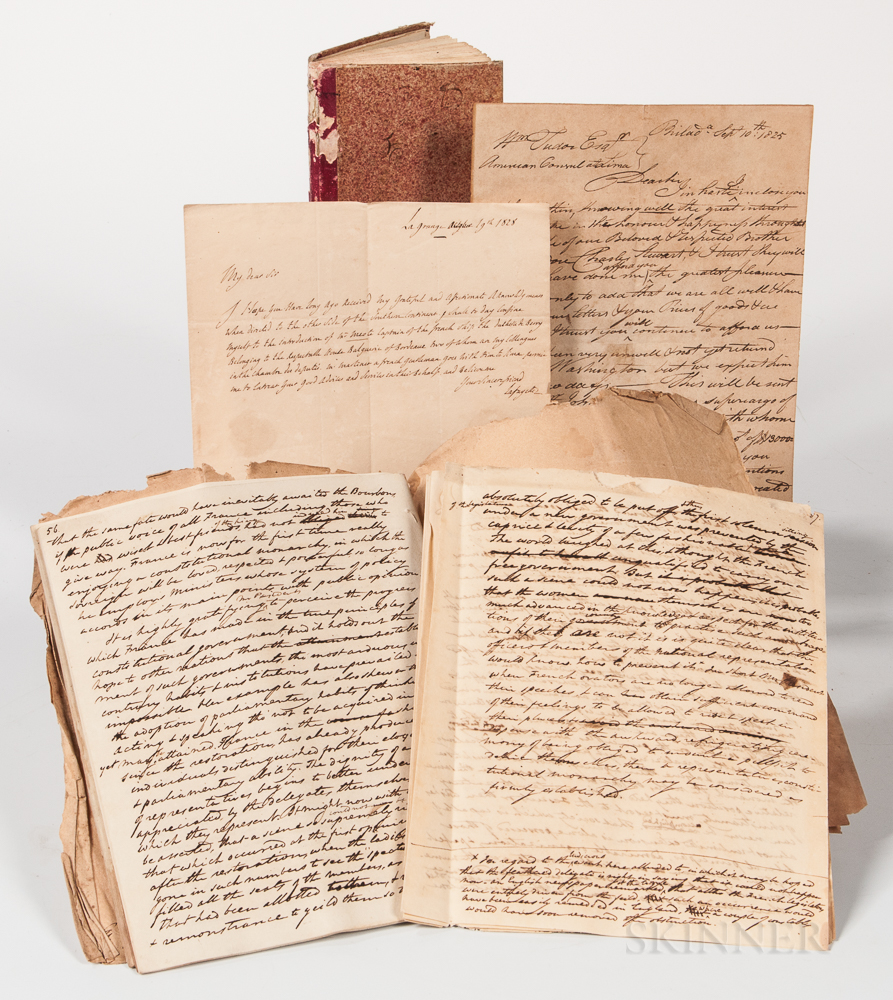 Tudor, William Jr. (1779-1830) Manuscript Archive. Collection of manuscript material, including the following: octavo-format manuscript from 1799, documenting European tour, including stops in Rotterdam, the Hague, Leyden, Antwerp, Lisle, Paris, Bordeaux, Amsterdam, Hamburg, Dover, Calais, London, Naples, Rome, Florence, Marseilles, and Nice; quarto-format autograph manuscript containing the text of a portion of Tudor's published work, Gebel Teir, consisting of sixty-nine numbered pages in Tudor's hand inscribed on versos only, with some notes on rectos, containing the text that appears in the published verso on pages 77 through 152, (approximately half of the complete text) inscribed on laid paper, in paper wrappers; autograph letter signed by the Marquis de Lafayette, 1828, addressed to Tudor in Rio de Janeiro in his capacity as U.S. chargé d'affaires to Brazil, a letter of introduction for a Mr. Meote [or perhaps Meoti], with address panel and seal; a double page document addressed to the President of the Senate and the Speaker of the House of Representatives; two autograph letters signed by Tudor Jr. to Tudor Senior, 1807, and 1810; Tudor's French passport, signed by the bearer, John Armstrong, and a French minister, with seals and stamps, 1807; a handwritten copy of Thomas Dawes's poem, "On the Death of James Otis Killed by Lightning at Andover, soon after the Peace of 1783"; genealogical notes on the Allen and Eliot families; two letters of recommendation for Tudor signed by Martin Andrade, both dated 1825, both in Spanish; transcriptions of letters from 1773 to Cushing, Cooper, and Winthrop; autograph letter addressed to Ralph Waldo Emerson with a signed autograph receipt by Emerson signed and dated on conjugate, 13 March 1873; approximately eight leaves of notes derived from Chalmers's writings; autograph letter signed by a French diplomat concerning Simon Bolivar and the wars and unrest in South America, March 1829, while Tudor was stationed in Brazil; autograph letter signed by Redford Webster (1761-1833) to Tudor Jr., written in 1820, containing interesting content concerning Benjamin Franklin's birthplace, and mentioning other seekers and sources of history from the Revolutionary period, including John Eliot's collects, held by his sons, Samuel Adams's grandson (also writing a history), and Cotton Mather; autograph working manuscript in Tudor Jr.'s hand, bifolium with text written over three and-a-half pages with text from his Life of James Otis; bifolium inscribed over four pages in Tudor Jr.'s hand, notes on proceedings on the Stamp Act; autograph letter signed by Tudor' Jr.'s mother, Delia Tudor to Josiah Quincy (bio-predation); autograph letter signed by Jonathan McCauley to Tudor Jr. while he was serving in Lima, 1825, regarding a shipment; and other material, should be viewed.
Estimate $5,000-7,000