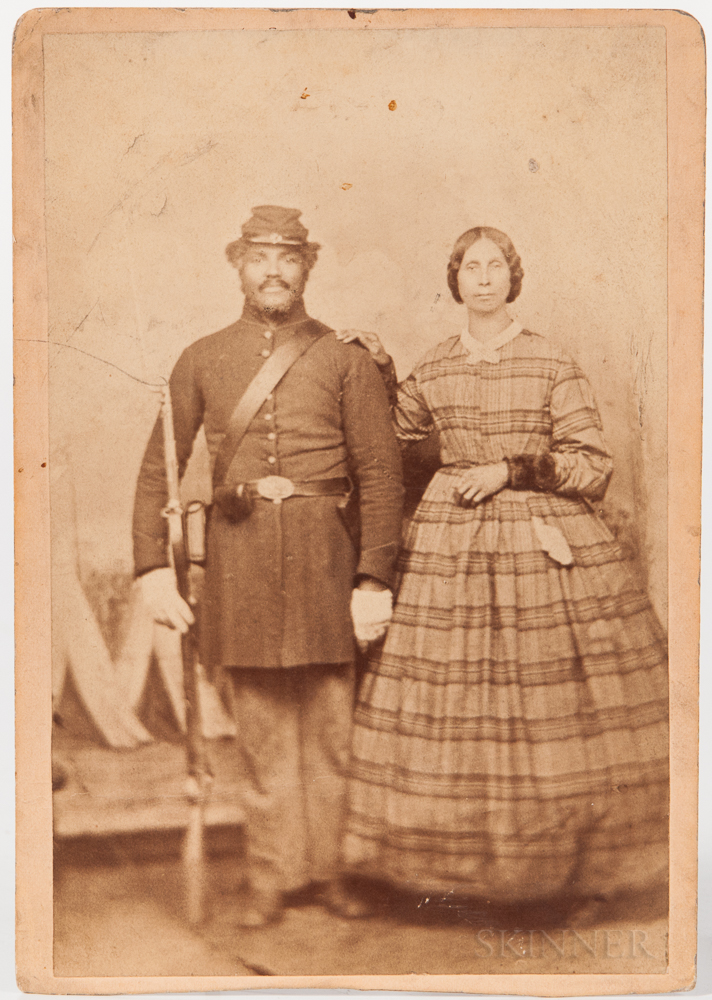 Redder, Jacob W. (1809-1864) African American Civil War Soldier and His Descendants, Lot of Photographs, 1860s-1960s. Including two cabinet cards of Jacob and his wife, Sophia Elizabeth Mills (1811-1886), with Redder in his Union Army uniform, taken between 1863 and 1864; an ambrotype portrait of Redder in uniform, seated, holding a sword, with a backdrop of army tents; approximately thirty-four late 19th century and early 20th century portraits of his descendants, most are cabinet cards and cartes-de-visite, with a smaller number of tintypes; [together with] a tattered document recording the births of Redder's nine children; a Currier & Ives Soldier's Grave print to Redder's memory; a Chaplain's pin from the Ladies G.A.R.; approximately eight studio portraits of Redder family descendants from upstate New York taken in the 1920s; three large-format charcoal and chalk-enhanced renderings after photos of the Plummer family: father, mother Sarah, and baby Paul [and] dozens of additional photos of Redder descendants from the 1950s and '60s: one hundred years of family history.

Jacob Redder was a little older than Abraham Lincoln when he enlisted in the Union Army in Providence, Rhode Island on November 19, 1863. At fifty-four years old, he stood six feet tall, and was the father of nine children. He seems to have lied about his age, which is listed on military paperwork as thirty-nine. In fact, Redder was born in Brunswick, New Jersey on January 16, 1809, at the time of his enlistment he was a farmer. He married Sophia Mills on February 19, 1830. Their children were: 1) Mareda Nov. 6, 1830; 2) Catharine Aug. 27, 1833; 3) Robert M. Sept. 6, 1835; 4) Charlotte M. Jan. 9, 1838; 5) David March 3, 1842; 6) Christina March 23, 1844; 7) Sarah Nov. 22, 1847; 8) Sophia E. May 23, 1849; and 9) Ariana Sept. 21, 1851. At the time of his deployment, Mareda was thirty-three, and Ariana was twelve. Sophia Elizabeth grew up to marry Joseph C. Jamieson and they had three natural children: Alvah Samuel Jamieson; Ethel Mary Jamieson; Sophia Elizabeth Jamieson; and one adopted child: Goddan Jamieson. Many but not all of the sitters are identified on the backs of their photographs, including: Jacob and Sophia's son David; John Redder's wife Mariah; David U. Smith, Mary M. Day, and Allen Smith; Ethel, Alvah, Sophie, and Lizzie Jamieson; Emmit, Erma, Venischia, Harry, and Seth Smith; Adelaide Spencer; Frank H. Blair; Della Grayson; Meredia Gray; Sophie Swails; Edith Mann; Georgiana Wilkins; Vera Frances Peterson; Arianna Scheckels; and Neil Robinson; others are not identified. Most of the cabinet card images were taken in upstate New York locations, including Elmira, Buffalo, Corning, and Niagara Falls, among others. The photos from the 1950s and 60s show families closer to Manhattan, vacationing at Tibbetts Brook, in Westchester, swimming, riding horses, and so on. The family in question lived in a brownstone in Brooklyn at this time whose house number was 381. Other photos show a Thanksgiving trip to Boston in 1952, a Christmas trip to Niagara Falls in the same year, and shots of apple picking, snowstorms, birthday parties, some noteworthy and other typical domestic images. The 20th century album may have been compiled by a Josephine G. Jenkins, who taught at PS 119 in Brooklyn.

Included with the lot are reproductions of Jacob Redder's Civil War record. He was a private in 14th Rhode Island Heavy Artillery (Colored). The regiment served unattached, XIII Corps, Department of the Gulf, to May 1864 and Defenses of New Orleans, Department of the Gulf, to October 1865. The units of the regiment were originally trained and organized on Dutch Island in Narragansett Bay. Three battalions were formed. Redder was stationed with the Battalions that served together at Camp Parapet in New Orleans. Private Redder contracted small pox in New Orleans, and died at the Corps d'Afrique General Hospital on April 30, 1864. At the time of his death, he is listed on military paperwork as "free" and having no personal effects.
Estimate $3,000-4,000