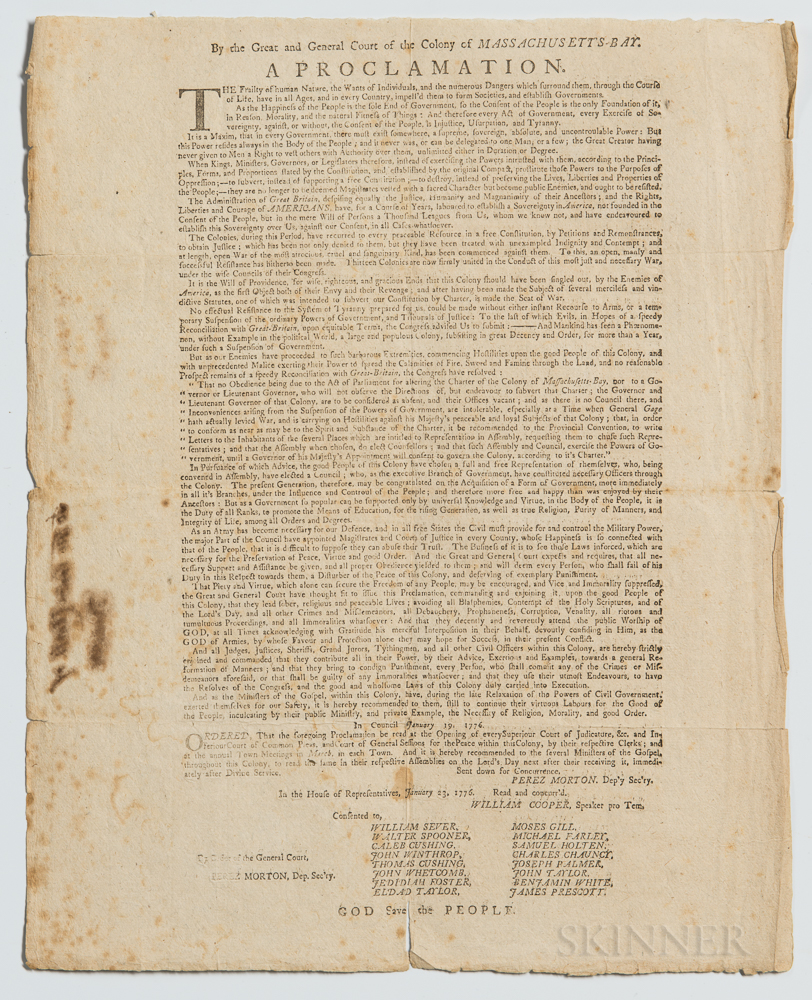 Massachusetts General Court and John Adams (1735-1826) By the Great and General Court of the Colony of Massachusetts-Bay. A Proclamation. The Frailty of Human Nature, the Wants of Individuals, and the Numerous Dangers which Surround them, through the Course of Life, have in all Ages, and in every Country, impell'd them to form Societies, and establish Governments.
[Watertown, MA: Printed by Benjamin Edes, 1776]. Folio-format broadside printed typographically, docketed on verso, "to the Town Clerk of Danvers" in brown ink, formerly folded in quarters, fragmentary along the central vertical fold at the foot ( 1 1/2 in.), some slight foxing, one spot, some edge folding, 17 x 13 3/4 in.

"As the happiness of the people is the sole end of government, so the consent of the people is the only foundation of it, in reason, morality, and the natural fitness of things. And therefore every act of government, every exercise of sovereignty against or without the consent of the people, is injustice, usurpation, and tyranny." Written by John Adams (the original draft, in his hand, is held at the state archives) at a pivotal moment in the struggle for independence from Great Britain, this proclamation, whose language resonates with that of the Declaration of Independence, makes the following news clear and official. "The governor and lieutenant-governor of [the] colony are to be considered as absent, and their offices vacant. And as there is no council there, and inconveniences arising from the suspension of powers of the government are intolerable, especially at a time when General Gage hath actually levied war, and is carrying on hostilities, [...] that it be recommended to the provincial convention to write letters to the inhabitants which are entitled to representation in assembly, requesting them to choose such representatives; [...] and that such assembly and council exercise the powers of government."
"In pursuance of which advice, the good people of this colony have chosen a full and free representation of themselves, [...] who, as the executive branch of government, have constituted necessary officers through the colony. The present generation, therefore, may be congratulated on the acquisition of a form of government more immediately in all its branches under the influence and control of the people, and therefore, more free and happy than was enjoyed by their ancestors." The document ends: GOD Save the PEOPLE.
This broadside is held by nine American institutions, http://estc.bl.uk/W36775; it has sold at auction twice since 1967. Thomas Streeter noted, "To me this is the most interesting of all the broadsides listed in Evans which were issued by the Massachusetts authorities in 1775 and 1776."
Estimate $30,000-50,000