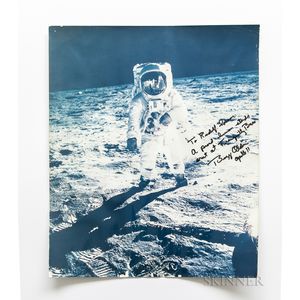 Apollo 11, Buzz Aldrin at Tranquility Base, July 11, 1969, Large-Format Photograph Signed by Aldrin.
click on any image to enlarge
Previous Next

Apollo 11, Buzz Aldrin at Tranquility Base, July 11, 1969, Large-Format Photograph Signed by Aldrin. 23 1/2 x 19 1/2 in. color photograph printed on "A Kodak Paper" photograph AS11-40-5948; a view of Buzz Aldrin with Armstrong reflected in his helmet, taken July 20, 1969, inscribed, "A proud human stands erect at Tranquility Base, Buzz Aldrin, Apollo 11" in black permanent marker, some color shift, surface dust, fly speck, chipping to edges, warping, generally good, very large example; [together with] a photograph of a Protocol Officer descending from Air Force One holding this photograph after Aldrin signed it. (2)

With a flair for fashion and style, the Couture & Textiles department curates auctions featuring designer and vintage clothing and accessories along with antique textiles.