Provenance: According to the consignor, the miniature "had been in a French family for many generations. The family dates it to Albert Malle, who was the maternal grandfather of the man who sold it. M. Malle was a French industrialist. The family thinks it might have been acquired by M. Malle from Alice Tully, with whom Malle shared a love of music and "liaison intellectuelle et artistique". For several years, Alice Tully lived in the same building as M. Malle in Paris. The family confirms that this is the same Alice Tully who was the granddaughter of Amory Houghton, heiress to the Corning Glass fortune, and New York philanthropist."

Note: William Birch was a celebrated enamellist, painter, and engraver. He was born in Warwickshire, England, on April 19, 1755. He learned the basics of enameling as an apprentice to London goldsmith Thomas Jeffrey and later under Henry Spicer, and exhibited enameled miniatures at the Royal Academy and the Society of Artists. In 1794 Birch and his family immigrated to Philadelphia and he soon began producing works in enamel, the first to introduce enamel painting in America, for which he received wide acclaim. He made landscapes, copies of Old Master paintings, and portrait miniatures. His most notable enamel portraits were the approximately sixty portrait miniatures of George Washington, after a portrait done of Washington by Gilbert Stuart for John Vaughan.

The miniature, painted at the tail end of Washington's presidency was likely intended to portray Washington in military uniform as Commander in Chief. It appears to have been inspired by paintings of Washington by Gilbert Stuart as well as works by Charles Wilson Peale depicting Washington in his revolutionary war uniform. The pose and hairstyle is most similar to Stuart's works. The uniform in which Washington is depicted, while blue and buff like his service uniform and includes the blue sash worn across his breast beneath his coat, has stylistic characteristics such as the high neck collar that do not appear on military clothing until the late 1790s. The depiction of the sash in the miniature is very reminiscent of Peale's images of Washington painted c. 1780. Portraits by Peale and Stuart were very popular and circulated widely as printed works and were likely know by Birch and closely study as he developed this composition.
Estimate $15,000-25,000 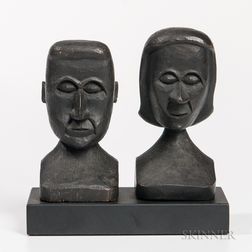 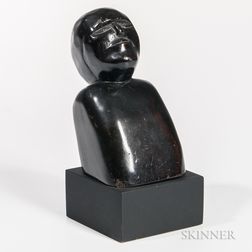 Carved Ebonized Bust of a Man 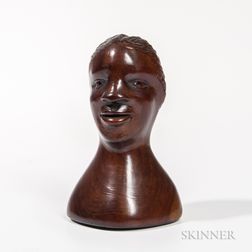 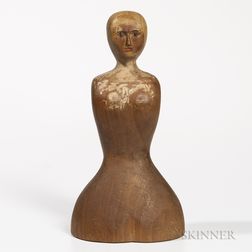 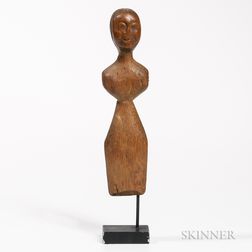 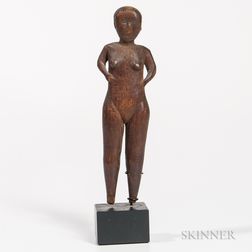 Carved Chippewa Love Charm in the Figure of a Woman

Carved Wood Figure of a Woman Lifting Her Skirt