British Pattern 1756 Long Land Service Musket With Worn Marks for the 15th or 43rd Regiments of Foot, .78 caliber, lock engraved behind the cock "TOWER" and crown over "GR" and crown broad arrow storekeeper's mark below the pan, walnut stock with storekeeper's mark on the right side of the butt and remnants of an inspector's mark behind the trigger guard, rammer channel marked "IC" and "V," barrel with worn engraving "15 REGT" or "43 REGT," with ordnance view and proof marks at the breech and remnants of barrel maker's mark on the left, brass furniture proper for pattern with trumpet second rammer pipe, escutcheon engraved "2/21," steel rammer with threaded end, barrel lg. 46, overall lg. 62 in.

Provenance: According to family history, the musket descended in the Bogardus family of Green County, New York, since the American Revolution and was reportedly part of the armament surrendered by the British at Saratoga. Purchased by William F. Stiles from the family in the early 1930s. The Bill Ahearn collection.

Note: The regimental mark on this gun is very worn and may in fact be a "43." Like the 43rd Regiment Long Land with provenance to Lexington and Concord at the Massachusetts State House, this gun is also constructed with a flared second pipe and has engraving on the thumb piece that is visually very similar.
Estimate $12,000-18,000

Top jaw and jaw screw appear to be old replacements, minor forestock splits have been repaired; metal with light pitting and toning. 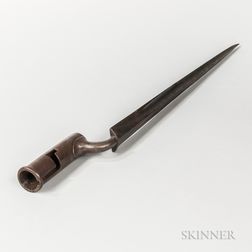 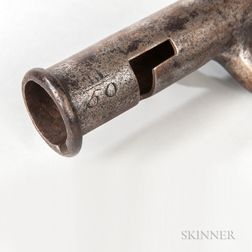 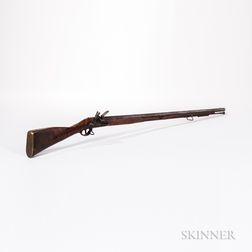 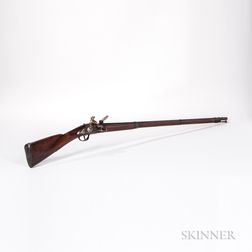 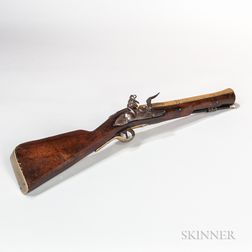 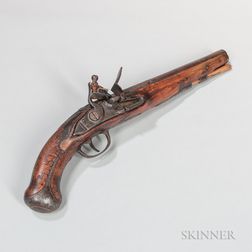 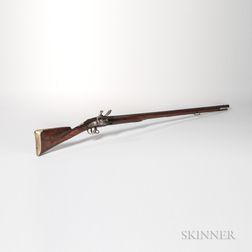 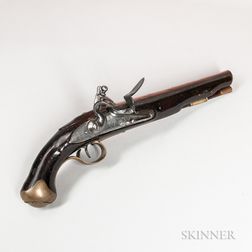