Whittingham, William (c. 1524-1579) A Brieff Discours off the Troubles Begonne at Franckford in Germany Anno domini 1554. Abowte the Bo 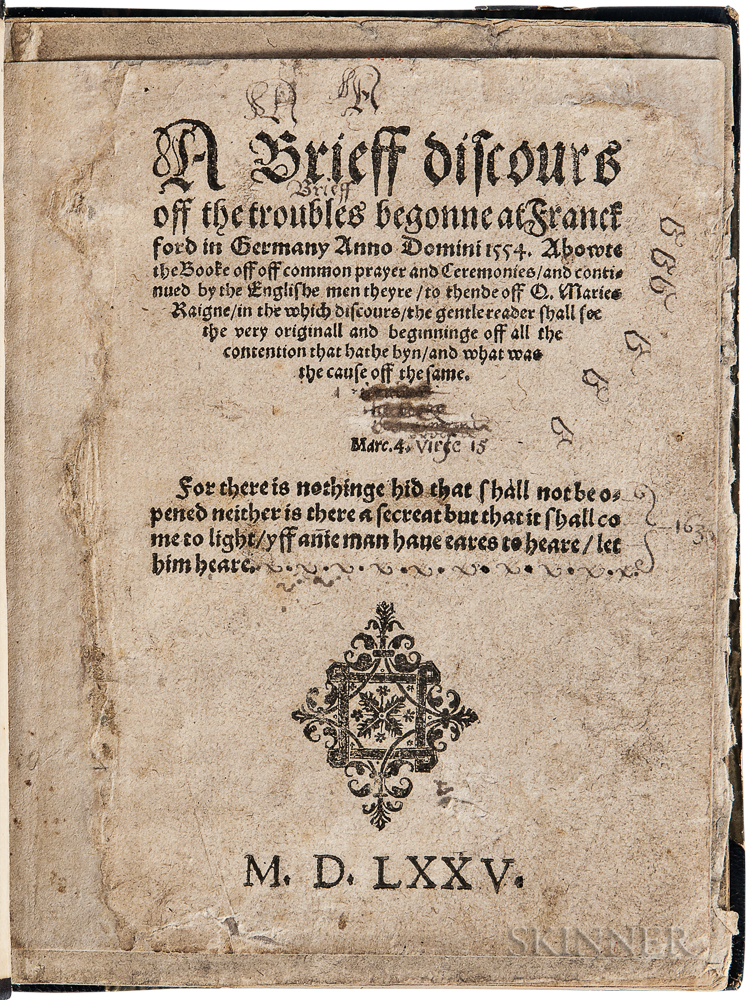 Whittingham, William (c. 1524-1579) A Brieff Discours off the Troubles Begonne at Franckford in Germany Anno domini 1554. Abowte the Booke off off [sic] common prayer and Ceremonies and continued by the Englishe men theyre to thende off Q. Maries Raigne in the which discours the gentle reader shall see the very originall and beginninge off all the contention that hathe byn and what was the cause off the same.
[Heidelberg: Printed by M. Schirat], 1575.
Second edition, quarto, rare, only three copies have been offered at auction since 1979; title page trimmed down and mounted, leaves of first signature a bit dusty with some damage along the gutter edge and a small hole on A3 affecting three a few letters in words on three lines on each side of the page, this wear is confined to the first signature; lacking final blank Dd6, ex libris James Erskine of Alva with his bookplate pasted on the verso of A3; 19th century half dark morocco and paste paper boards with gilt emblem of the Society of Writers to the Signet on both boards, 7 1/4 x 5 1/2 in.

N.B. "Educated at Brasenose College, Oxford, Whittingham became a Protestant and Reformed Churchman; as such, it was necessary to flee England when Mary I ascended the throne and initiated her policies of hostility and persecutions against Reformed Churchmen.

By 1554, Whittingham made his way to Frankfurt, Germany, where he joined a group of Protestant exiles from Mary's reign. There, he met John Knox and became a supporter of Reformed Theology, a force that would inform and shape later Elizabethan divines. (This would later be pushed back by Laudian forces of anti-Calvinism in the 17th century.) He also married the sister of John Calvin. He took over Knox's role as established, ordained and recognised minister to the English congregation of exiles in Geneva. In Geneva, he started the work for which he is best remembered, a Bible translation that came to be known as the Geneva Bible.

In 1560, Whittingham returned to England, and was made dean of Durham in 1563, an office he held at his death in 1579—a Protestant, Reformed, Genevan, Prayer Book and Anglican divine." (DNB) 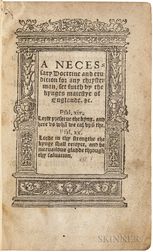 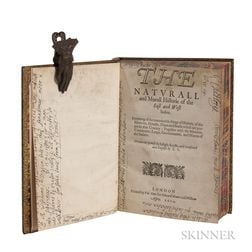