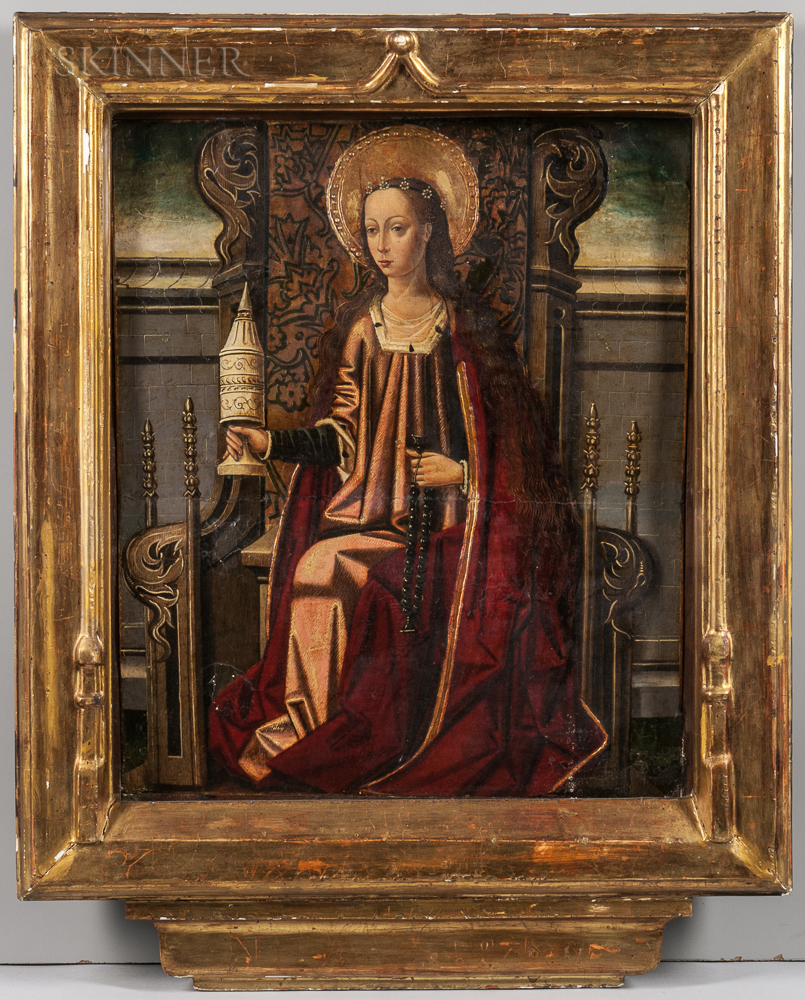 Mary Magdalene Enthroned, Holding an Unguent Jar and Rosary
Unsigned.
Egg tempera and gilt on panel, 19 1/8 x 15 7/8 in. (48.8 x 40.3 cm), framed.
Condition: Undulating warping to the panel, panel backed with a wax lining and fabric reinforcement running horizontally across the middle of the reverse with a corresponding line of craquelure on the recto; horizontal crack 4 1/2 to 5 inches down from the top edge of the panel running about half way across the panel, presenting as a jagged tear to the u.l. on the recto; the painted surface is irregular, with three round raised spots occurring on a vertical axis along the left side; retouch which does not fluoresce.

Provenance: Purchased in Madrid before 1977, by descent within the family of the current owner.

N.B. During the first decades of the fifteenth century, coinciding with the early Italian Renaissance but unrelated to that movement, Flanders became an influential force in European painting. The spread of Flemish artistic models affected an important stylistic change in European Gothic art, particularly among the artists active in the Hispanic kingdoms, as displayed in the painting at hand from Aragon in northeastern Spain.

The phrase "Hispano-Flemish" is used to describe the hybridized visual tradition that combined Flemish artistic innovation with the localized traditions of the various Iberian kingdoms, resulting in artworks that are neither quintessentially Netherlandish nor Spanish. A synthesis of International Gothic, in its Spanish form, and the influence of the great Flemish masters of the fifteenth century, the Hispano-Flemish style was prevalent throughout the latter half of the fifteenth century, rising and falling in popularity and influence in different geographical areas. The Hispano-Flemish style was developed by both Netherlandish immigrant artists and by Spanish artists incorporating Northern European aesthetics into their practice, reflecting the socio-political and economic networks between Spain and the Low Countries. In the east, under Alphonso V of Aragon and his successors, Italian and Flemish influences were blended. The combination of Northern and Spanish influences in this work include the crisp lines of drapery and the interior setting more typical of the north, with the southern influence of the reverence of Mary Magdalene, here shown enthroned in a way more typical of a Madonna and Child.
Estimate $30,000-50,000

The work as had several campaigns of work done to it including retouch and repairs to splits and raised areas (possibly knots in the panel?). The surface seems stable with the possible exception of the raised areas; it is impossible to say how much these are suseptible to changes in temperature and humidity.