Provenance: Collection of Charles Scribner's Sons; by descent within the family of the publisher to the current owner.

N.B. N.C. Wyeth is one of America's greatest and best-loved illustrators, as well as an accomplished easel painter. With Massachusetts roots, Wyeth first studied art at the Massachusetts Normal Art School (today's Mass College of Art) and with Eric Pape and Charles W. Reed. However his most impactful mentor was Howard Pyle, with whom he studied during 1902-1904 in Chadds Ford, Pennsylvania. Pyle urged his students to "jump into" their illustrations, enlivening their compositions with a vigorous style and sense of drama, while always adhering to the highest craftsmanship. Wyeth embodied this advice throughout his remarkable career. He sold his first illustration to the Saturday Evening Post in 1903 at 21 years of age and went on to create nearly 2,500 illustrations for the magazine. In 1911 he accepted his first book commission from Charles Scribner, to illustrate Treasure Island, a tremendous success leading to work on a whole range of adventure books including Kidnapped, Robin Hood, Robinson Crusoe and The Last of the Mohicans, which came to be known as Scribner's Classics, many still in print today. These illustrations defined the image of the brave and adventurous hero for generations of young readers, and it has been suggested that the illustrations became the inspiration for many of the current cinematic heroes such as Indiana Jones.

Wyeth's illustrations for The Scottish Chiefs were created c. 1921, for the first edition of Jane Porter's book. The painting being offered at Skinner has been in private hands since that time, and descended in the Scribner family. The scene depicts a pivotal moment in the life of Sir William Wallace, a Scottish knight and leader during the Wars of Scottish Independence, who defeated an English army at the Battle of Stirling Bridge in September 1297. The dramatic scene shows Wallace, faced with the splintering alliance and betrayal of fellow Scottish chieftains who mean to take him prisoner, drawing the sword he had captured from Edward I at Stirling and shouting, "He that first makes a stroke at me shall find his death on this Southron steel! This sword I made the arm of the usurper yield to me; and this sword shall defend the regent of Scotland."

In addition to Jane Porter's narrative, Wallace's life was retold in Blind Harry's 15th-century epic poem The Wallace, in works by Sir Walter Scott, and more recently in the Academy Award-winning film Braveheart (1995).

The lot is accompanied by a copy of The Scottish Chiefs written by Jane Porter and illustrated by N.C. Wyeth, in which the painting is reproduced on page 318. As mentioned above, the original copyright date for the book was 1921; this edition bears the date 1933 on the title page.
Estimate $150,000-250,000

The Scribner's label on the back of the painting is inscribed with the title and "...Scottish Chiefs/October 1921/p. 318." The label is affixed directly to the back of the canvas.

Work is numbered very faintly in red on the reverse "59623," the last two digits being faint and partially hidden by the Scribner's label. The work is numbered similarly on the stretcher. The Foster Brothers label on the frame bears the order number "2046."

Under UV examination there are some small areas that seem to reflect natural pigment fluorescence in the brown color surrounding the heads of the chieftains. Under general light, this same area seems to be slightly unevenly varnished.

Canvas rippling is minor but is more noticeable in the upper corners. A.D. Shattuck style stretcher.

The Brandywine River Museum of Art has kindly supplied further documentation from its Walter and Leonore Research Center about the work, including a scan of the original index card for the painting from the Scribner's Art Department archives and a scan of a dust jacket from one early edition of The Scottish Chiefs (year uncertain) featuring the painting. Prints of these two documents will accompany the lot. 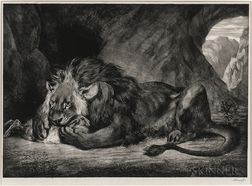 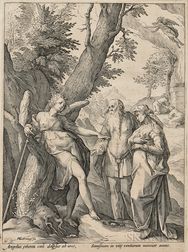 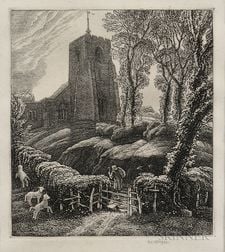 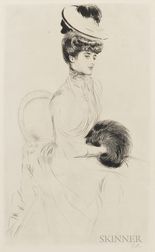 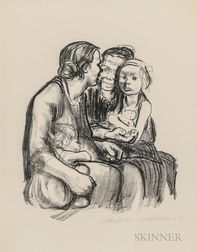 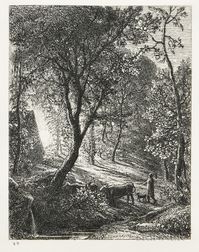 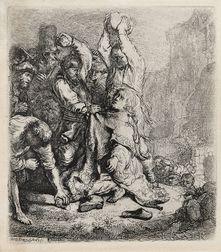