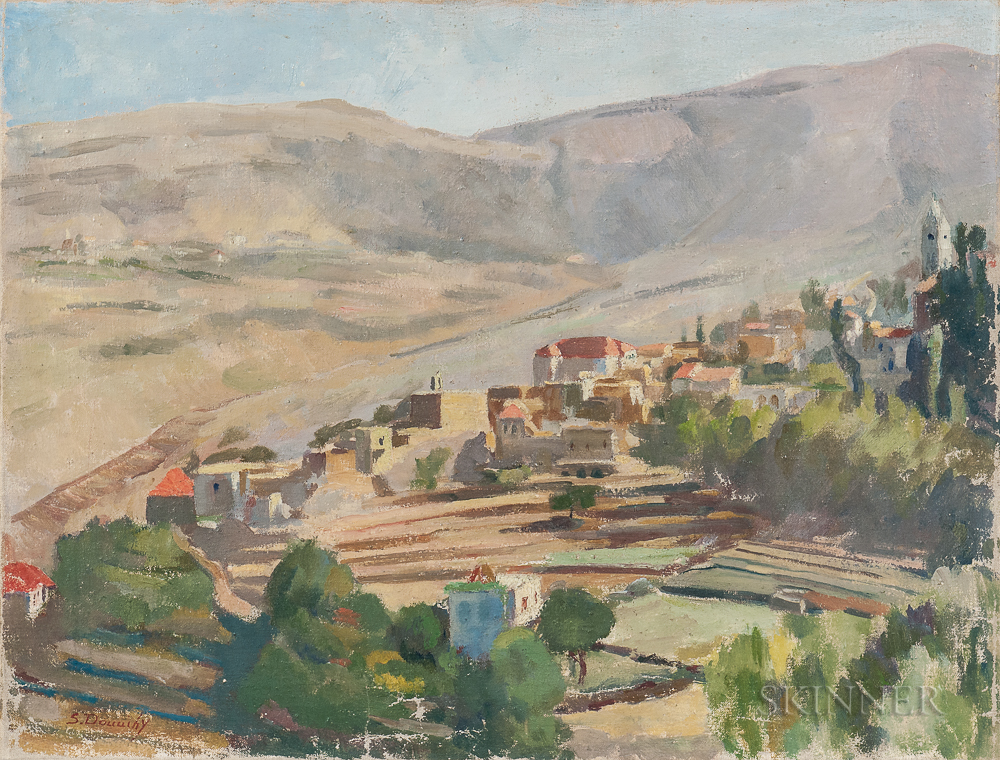 Provenance: Acquired directly from the artist at his home in Windham, New York, in the late 1970s.

N.B. Born in the picturesque village of Ehden in the northern mountains of Lebanon, Saliba Douaihy displayed an early aptitude for drawing and left his hometown at age fourteen to study with artist Habib Shrour in Beirut. In 1932, Douaihy won a scholarship from the Lebanese government to study art in Paris. He spent the following four years exploring a variety of media, exhibiting his works in local galleries and exhibitions, and traveling in Europe.

Upon returning to Beirut, Douaihy worked on landscapes, portraits, and scenes of everyday life in Lebanon, often painting en plein air in the valleys and mountainous villages outside of the city. It was during this period that he likely painted The Steppes of Lebanon. Douaihy gained recognition in Lebanon, participating in national and international exhibitions including the Lebanese pavilion's display at the 1939 New York World's Fair.

In 1950, at the height of Douaihy's career, the Lebanese president selected the artist as a cultural ambassador for Lebanon to the United States and Mexico, a position the artist held for the rest of his life. He settled in New York City and worked in a variety of media, including stained glass. He also discovered the works of contemporary American abstract artists, including Mark Rothko, Hans Hofmann, and Ad Reinhardt, which influenced him to move away from his earlier academic style in favor of minimalist abstract paintings. By the end of the 1950s, Douaihy had turned entirely to the flat monochromatic forms, fine lines, and sharp edges that are evident in Lot 413.

After a one-man show in 1966 at the Contemporaries gallery in New York City, Douaihy gained recognition as an abstract artist. Subsequently, his works were included in exhibitions at the Museum of Modern Art, the Guggenheim Museum, and the Pennsylvania Academy of Fine Arts. In 1978, the North Carolina Museum of Art mounted a retrospective of the artist's work.

Douaihy's œuvre can be divided into three distinct genres: his early paintings of the Lebanese landscape and people, including the present lot; a series of ecclesiastical stained glass windows and murals that he completed for Maronite Churches in the United States and Lebanon; and the bright, minimalist abstract works, of which Lot 413 is a stunning example, that were his focus from the 1960s through the end of his career. We are fortunate to have examples from two of these genres included in this sale.

The Saliba Douaihy Foundation dates this work to the late 1930s or early 1940s, painted in Douaihy's Beirut, Lebanon, studio. A copy of Saliba Douaihy Artist, In Celebration of 100 Years, signed by the author and numbered "80/100," accompanies the lot. The proceeds from the sale of this work will contribute to the creation of a life-sized statue of Saliba Douaihy in his hometown of Ehden, Lebanon.
Estimate $20,000-40,000