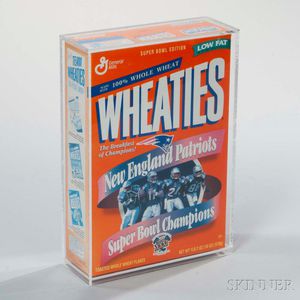 "New England Patriots Super Bowl XXXI Champions" Wheaties Box, c. 1997, produced in advance of the game, which was played January 26, 1997, and incorrectly stating that the New England Patriots won Super Bowl XXXI, the front featuring images of Ben Coates, Drew Bledsoe, Ty Law, and Terry Glenn, and with a season recap on the back of the box titled "The Patriots Rule!," box ht. 12 in., housed in a Plexiglas case.
Estimate $50-75