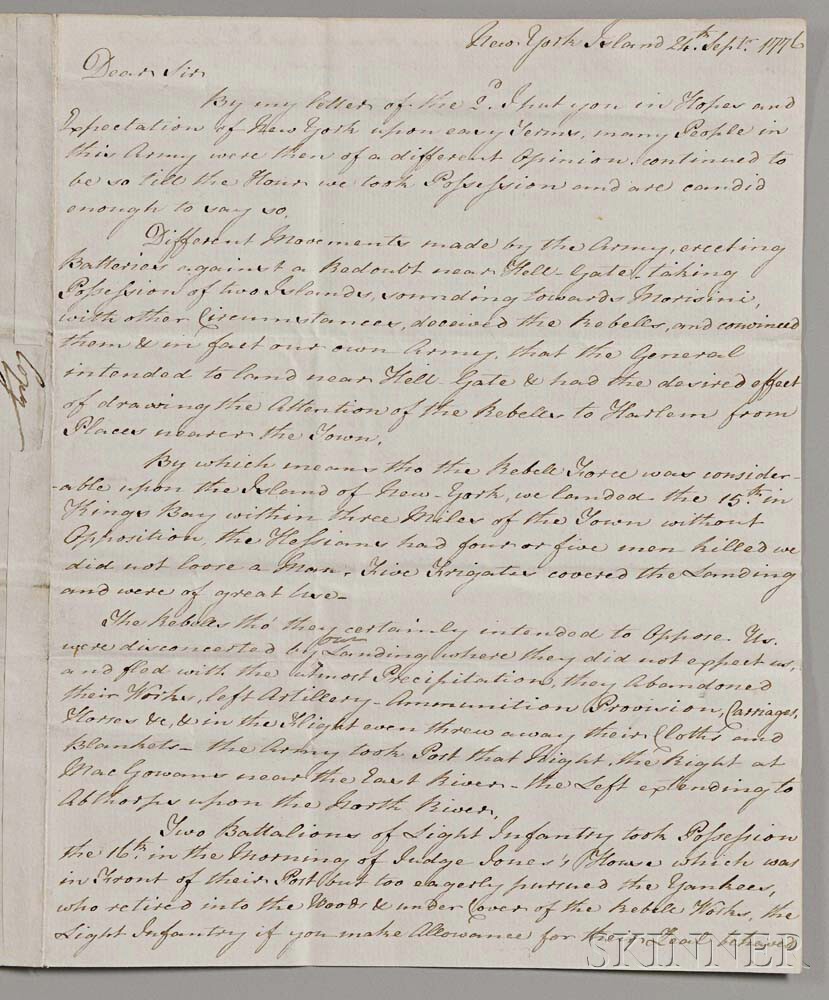 James Grant, Laird of Ballindalloch (1720-1806) Retained Period Copy of a Letter Written 24 September 1776. Laid paper watermarked bifolium, two sheets joined, inscribed over three pages, docketed on the reverse. Old folds, generally good, housed in a custom cloth case, 9 1/4 x 7 1/2 in.
Grant served as a Colonel for the British 55th foot under the command of General Howe, commanding brigades at the Battle of Long Island, and the first and second brigades at the Battles of Brandywine and Germantown. In this letter, Grant recounts the 15 September 1776 British victory in great detail.
"Dear Sir, By letter of the 2d I put you in Hopes and expectations of New York upon easy Terms, many People in this Army were then of a different Opinion, continued to be so till the Hour we took Possession and are candid enough to say so.
Different Movements made by the Army, erecting Batteries against a redoubt near Hell-Gate, taking Possession of two Islands, rounding towards Morisini, with other circumstances, deceived the rebells, and convinced them in fact our own Army, that the General intended to land near Hell-Gate & had the desired effect of drawing the Attention of the Rebells to Harlem from Places nearer the Town.
By which means tho the Rebell Forces were considerable upon the Island of New York, we landed the 15th, in Kings Bay within three Miles of the Town without Opposition, the Hessians had four or five men killed we did not loose a Man. Five Frigates covered the Landing and were of great use."
Provenance: The Estate of David Spinney.
Estimate $1,000-1,500