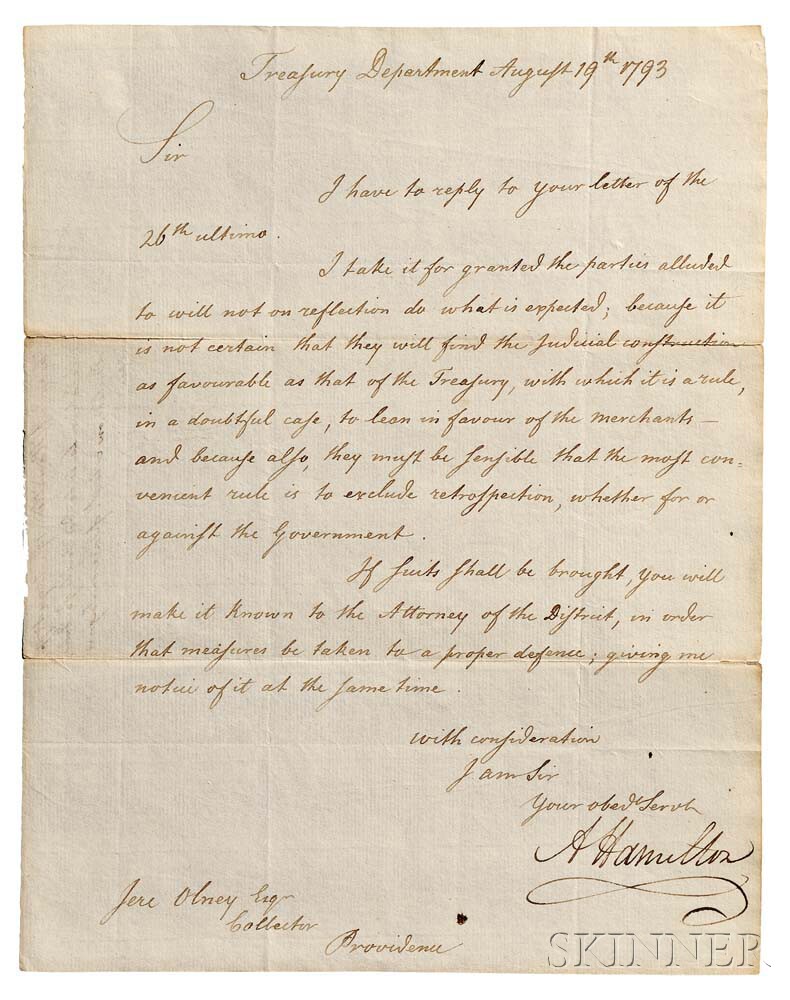 Hamilton, Alexander (1755-1804) Letter Signed, Treasury Department, Philadelphia, 19 August 1793. Single folio leaf, laid paper, inscribed on one side, docketed on verso. To Jeremiah Olney (1749-1812), 10 x 8 in.
"Sir, I have to reply to your letter of the 26th ultimo.
I take it for granted the parties alluded to will not on reflection do what is expected; because it is not certain that they will find the judicial construction as favourable as that of the Treasury, with which it is a rule, in a doubtful case, to lean in favour of the Merchants and because also, they might be sensible that the most convenient rule is to exclude retrospection, whether for or against the Government.
If suits shall be brought, you will make it known to the Attorney of the District, in order that measures be taken to a proper defence; giving me notice of it at the same time.
with consideration I am Sir Your obedt Servt
A Hamilton"
Jeremiah Olney fought in the Revolutionary War at Red Bank, the battle of Monmouth, and Yorktown. After the war, he helped to organize the Society of the Cincinnati and was a supporter of the Federalist party. Hamilton writes to him in his long-held tenure as Collector of Customs for the Port of Providence. "[Olney's] insistence on the strict application of duty schedules and port fees irritated the shipping community, and there were unsuccessful attempts in both 1793 and 1802 to have him removed from office. His resignation in 1809 was precipitated by the Embargo Act, which cut into his income and encouraged open defiance by smugglers. He joined the majority of the state in hostility to the embargo, which he often referred to as the 'Fatal Act.'" (Quoted from the Rhode Island Historical Society's Manuscript Division's finding aid for the Olney papers.)
In this particular letter, Hamilton, acting as our first Secretary of the Treasury, is discussing the possibility of merchants bringing suit against the federal government in protest of extra duties, including a tare on sugars. A letter from Olney written the previous year refers to this long-simmering problem in the detail.
"Providence, December 6, 1792. The continued Complaints of the Merchants and Sea-Faring People, residing in this District, That the different Practices of different Collectors occasion an unequal operation of the same Law in the collection of the Revenue; together with the Censures thrown out against me for not conforming to that which is the most favorable to the Importers, constrains me Sir, respectfully, to recall your attention to my Letters of the 17th of Jany. and 28 Feby. 1791, upon the Subject of allowance for Tare on Sugars, Cocoa &c. and the Duty on Oranges, Limes, and Sweetmeats, not brought for Sale, very inconsiderable, and which the Merchants here say is not collected in any other Place; and to entreat that you would be pleased to cause such Measures to be adopted as will tend to produce a speedy uniformity of Practice in those particulars, throughout the United States; rendering thereby the operation of the Revenue Laws equal, and relieving my Mind from the disagreeable Sensations consequent upon such repeated Complaints."
Provenance: The Estate of David Spinney.
Estimate $6,000-8,000