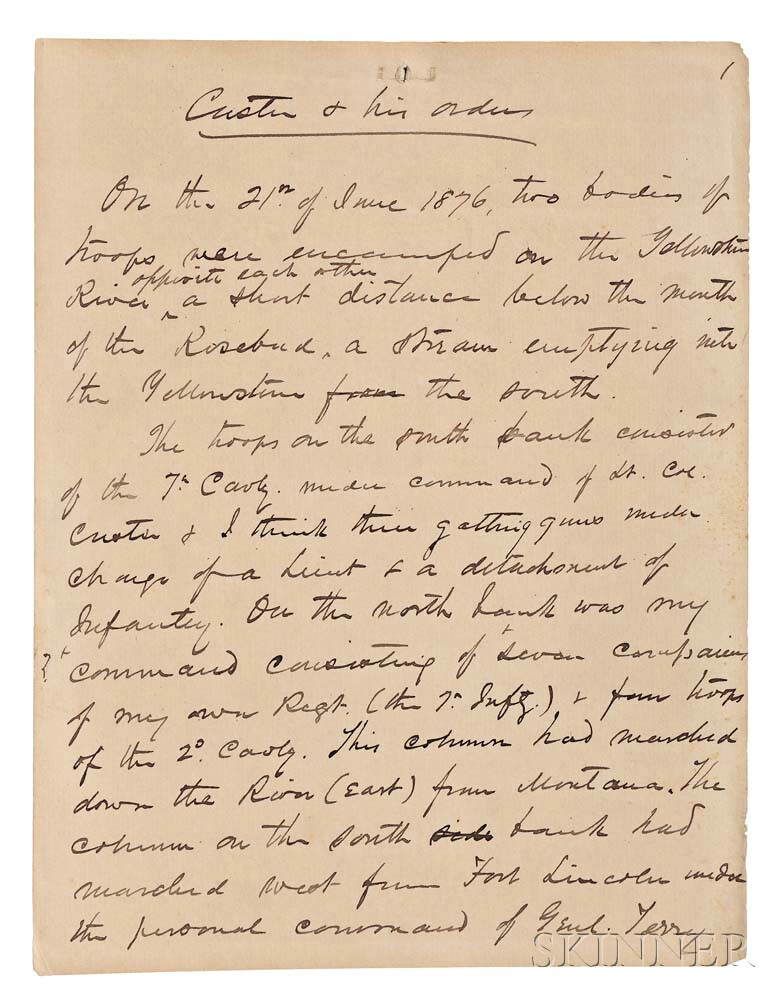 Gibbon, John (1827-1896) Unpublished Autograph Manuscript, Custer & his Orders, c. 1890. Folio wove paper, consisting of nineteen leaves, each inscribed on one side, with an additional nine lines of manuscript notes on two other slips of paper, the main text written on 9 3/4 x 7 1/2 in. sheets, totaling approximately 2,500 words, several sheets with edits, easily readable; minor edge wear, in a modern custom morocco case, gilt spine, leather labels.
A firsthand account of the planning leading up to the massacre at Little Big Horn in June 1876, written by General John Gibbon, who was involved in the planning and operations, and was one of Custer's superior officers. Gibbon and his troops were among the first to arrive at the scene of the battle, and helped to bury Custer's dead and evacuate the survivors. Could the tragedy at Little Big Horn have been avoided, had Custer followed orders? In this seemingly unpublished account, Gibbon explains that he met with General Alfred Terry, Major Marcus Reno, and Custer on June 21, 1876 to determine the plan of attack. Smoke from Indian fires had been spotted from the valley of the Little Big Horn, "and hence it was inferred there must be a camp of Indians somewhere along that stream. The question discussed was how to approach them and strike them to the best advantage. [...] I think Genl. Terry had already made up his mind, when the discussion took place, to send Custer with a command to follow up the trail discovered by Reno. [...] In the course of the discussion I proposed the question what would the Indians probably do when they were disturbed." According to Gibbon, Custer seems to have departed from the plan. "I suggested it would be advisable for Custer to keep on up the Rosebud; instead of following the trail over into the Little Big Horn valley, and after crossing over nearer to the mountains approach the supposed Indian camp from the south. This would not only interpose his force between the Indians and their refuge (the Big Horn Mountains) but would give my command the requisite time to get up, as I had the longest distance to pass over. This was agreed to apparently on the part of all. [...] Custer was directed to examine the head of that valley and endeavor to send a messenger down it to communicate to Genl. Terry news of his progress and any information of importance he may have gained. This was regarded as a matter of some considerable moment as it would bring us news of the other columns and might possibly cause a modification of our movement."
The story ends badly. "It is now a matter of history that Genl. Terry received no message from Custer, [...] nor ever saw him again. It is also well known that Custer did not follow the line of march marked out for him at the conference. [...] His mind may have been so engrossed by his preparations for the conflict before him as to cause him to overlook [sending a message] for the time. [...] In all well disciplined military bodies the wishes of the commander are always when possible to be construed as orders."
Provenance: The Estate of David Spinney.
Estimate $20,000-25,000