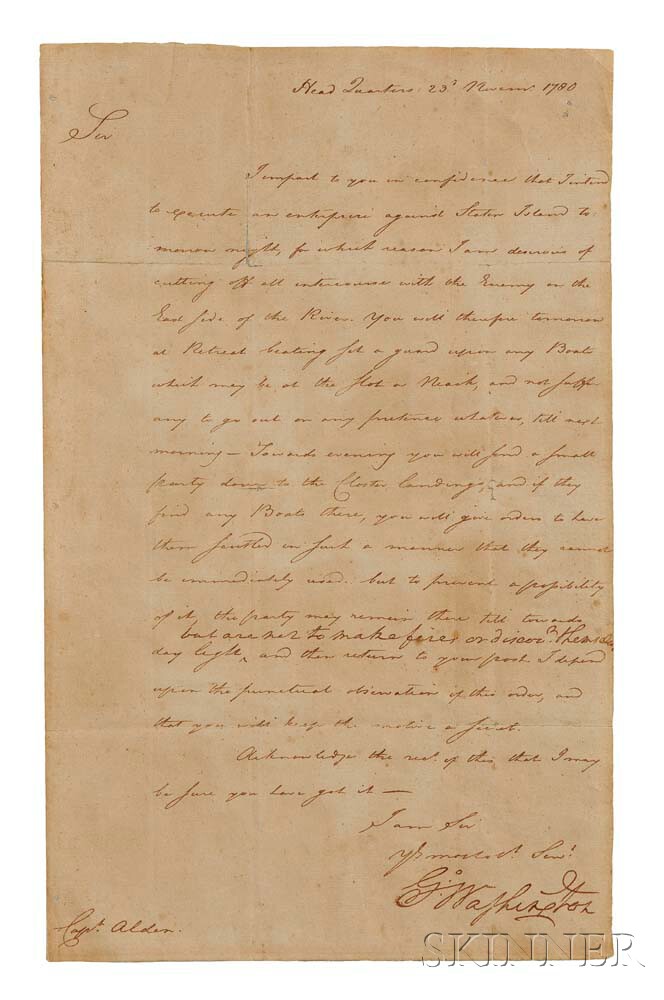 Washington, George (1732-1799) Letter Signed, Headquarters, Passaic Falls, New Jersey, 23 November 1780. Single leaf inscribed on one page, to Major Judah Alden (1750-1845), in the hand of Tench Tilghman (1744-1786), with one line in Washington's hand (the line in question appears in italics in the transcription below); evenly toned, backed with Japanese tissue, from the collection of Frederick S. Peck, Belton Court, Barrington, Rhode Island, published in Autograph Letters of George Washington, 1932 (pp. 20-21); 8 1/4 x 13 1/4 in.
"Sir, I impart to you in confidence that I intend to execute an enterprise against Staten Island tomorrow night, for which reason I am desirous of cutting off all intercourse with the Enemy on the East Side of the River. You will therefore tomorrow at Retreat beating set a guard upon any Boats which may be at the Slot on the Niack, and not suffer any to go out on any pretence whatever, till next morning--- Towards evening you will find a small party down to the Closter landings, and if they find any Boats there, you will give orders to have them scuttled in such a manner that they cannot be immediately used but to prevent a probability of it, the party may remain there till towards day light but are not to make fires or discover themselves and then return to your post. I depend upon the punctual observation of this order, and that you will keep the motive a secret.
Acknowledge the rect. of this that I may be sure you have got it--- I am Sir, yr Most Obt. Sert., G. Washington"
Regarding this elaborate plan of attack, which included misdirection of Washington's own officers, aide-de-camp Lieutenant Colonel David Humphreys (1752-1818) later wrote, "Never was a plan better arranged, and never did circumstances promise more sure or complete success. The British were not only unalarmed, but our own troops were likewise entirely misguided in their expectations." This letter itself is a piece of misdirection. The Marquis de Lafayette, stationed with Washington at this time, was to lead an attack on Fort Washington with his light troops, followed by Washington, in an attempt to make a push for New York City. The "accidental intervention" of some British vessels caused Washington to scuttle the plan. (Humphreys quoted in Washington Irving's Life of George Washington, New York: Putnam, 1876, vol. II, page 553).
Provenance: The Estate of David Spinney.
Estimate $8,000-10,000