Collett, John (1720-1780) Paul Jones Shooting a Sailor Who Had Attempted to Strike his Colours in an Engagement. 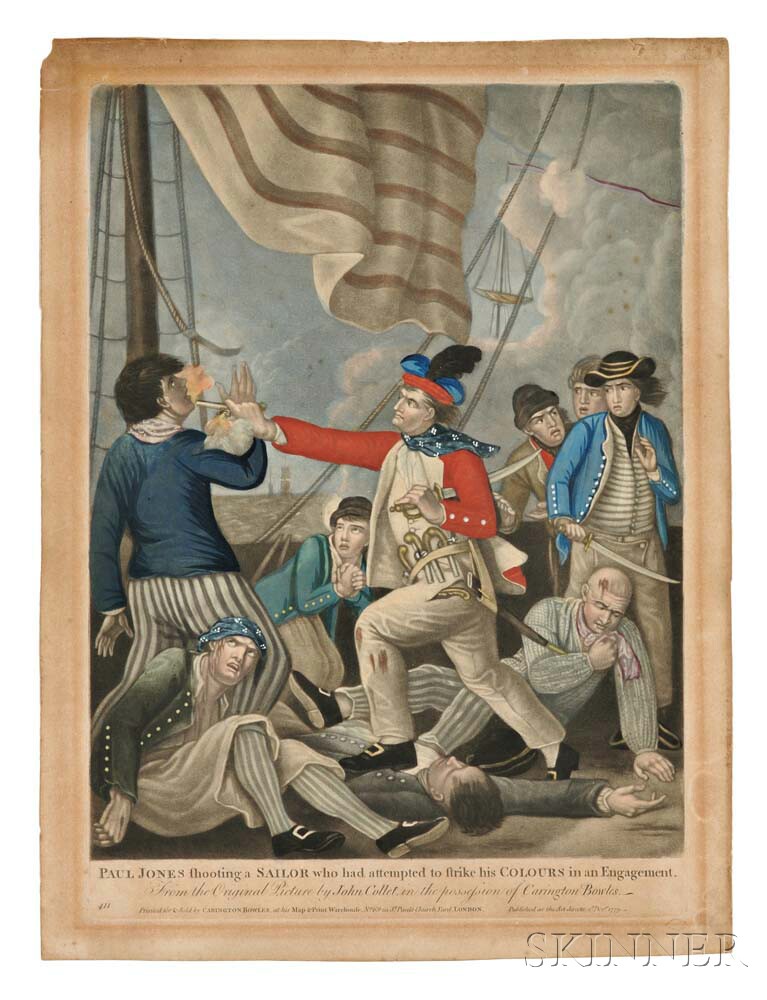 Collett, John (1720-1780) Paul Jones Shooting a Sailor Who Had Attempted to Strike his Colours in an Engagement. London: Carrington Bowles, 2 December 1779. Mezzotint with original hand-coloring, the first of three versions published, printed on a folio sheet, matted; toning to margins, four inch repaired tear to upper blank margin, 15 1/8 x 11 3/8 in.
In this satirical print produced by the British in the midst of the American Revolutionary War, John Paul Jones is depicted carrying no fewer than five pistols, and firing upon one of his own men during an engagement between his ship, the Bonhomme Richard, and the HMS Serapis. The battle itself was brutal. Jones's ship was not a match for the British vessel, and they fought at close range, i.e., two feet. Near the end of the fight, half of the sailors on each ship were dead, and both crafts were on fire. This is the battle whose story has passed down to us through history, in which Jones either said to his adversary, in response to the question, "Do you strike?" "No! I'll sink, but I'm damned if I'll strike!" or "I have not yet begun to fight!" The story that inspired the satirical image is this: it was reported that Jones's chief gunner, Henry Gardner, was shouting for quarter during the battle (signaling defeat) and that Jones silenced him with a pistol-whip.
This version is described as "excessively rare" in the catalogue of the Hampton L. Carson Collection of Engraved Portraits of American Naval Commanders.
Provenance: The Estate of David Spinney.
Estimate $6,000-8,000