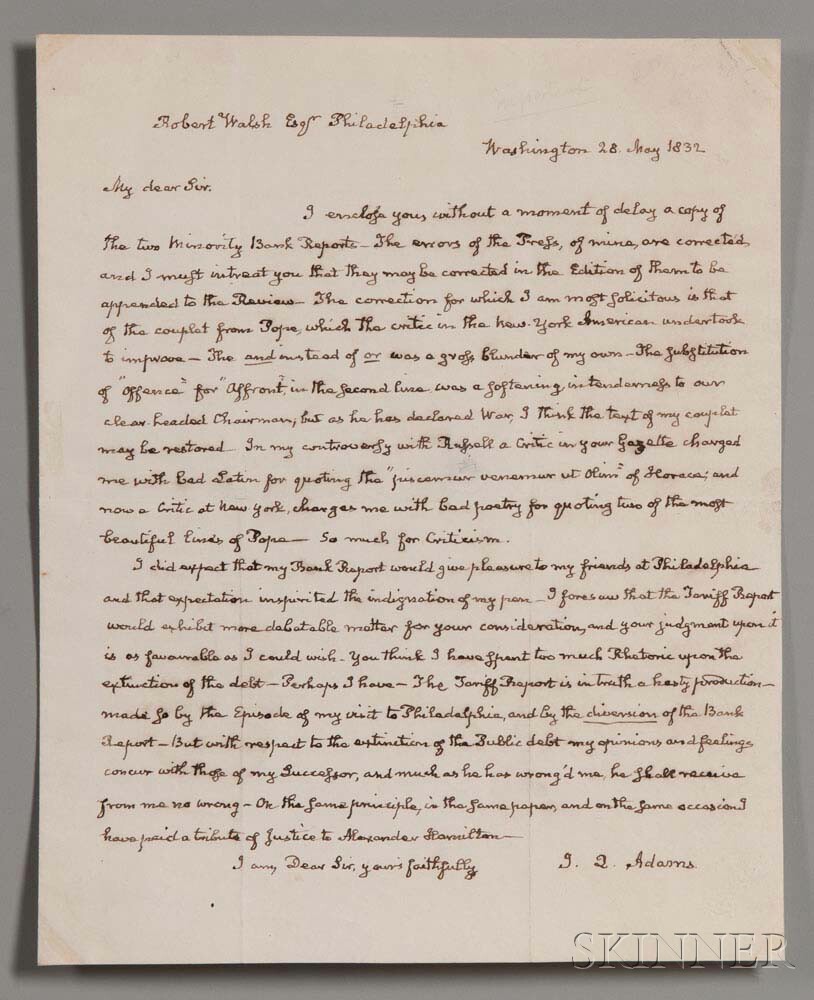 Adams, John Quincy (1767-1848) Autograph Letter Signed, Washington, D.C., 28 May 1832. Wove paper bifolium inscribed on one page. To Robert Walsh Jr. (1785-1859), editor of the Philadelphia National Gazette, on a number of topics, sending corrected copies of his Bank and Tariff Reports [not present], straightening out some misquotes of Pope, and ending with the hope that his bank report would be "a tribute of justice to Alexander Hamilton." Light folds, neat repair, very good, in a custom case, 10 x 8 in.
"My dear Sir, I enclose you without a moment of delay a copy of the two minority Bank Reports. The errors of the Press, of mine, are corrected and I must intreat you that they may be corrected in the Edition of them to be appended to the Review. The correction for which I am most solicitous is that of the couplet from Pope, which the critic in the New York American undertook to improve. The and instead of or was a gross blunder of my own. The substitution of 'offence' for 'affront,' in the second line, was a softening in tenderness to our clear-headed Chairman; but as he has declared War, I think the text of my couplet may be restored. In my controversy with Russell a critic in your Gazette charged me with bad Latin for quoting the 'piscemur venemur ut olum' of Horace and now a critic at New York charges me with bad poetry for quoting two of the most beautiful lines of Pope-- so much for criticism.
I did expect that my Bank Report would give pleasure to my friends at Philadelphia and that expectation inspirited the indignation of my foes [?]. I foresaw that the Tariff Report would exhibit more debatable matter for your consideration, and your judgment upon it is as favourable as I could wish. You think I have spent too much Rhetoric upon the extinction of the debt. Perhaps I have. The Tariff Report is in truth a hasty production made so by the Episode of my visit to Philadelphia, and by the diversion of the Bank Report. But with respect to the extinction of the Public debt my opinions and feelings concur with those of my Successor, and much as he has wrong'd me, he shall receive from me no wrong. On the same principle, in the same paper, and on the same occasion have paid a tribute of Justice to Alexander Hamilton. I am, Dear Sir, yours faithfully, J.Q. Adams"
"As a member of a special committee appointed by the Jacksonian Speaker of the House in 1832 to investigate the Bank of the United States, [John Quincy Adams] drafted a lengthy minority report assailing the attack on the bank. He contended that the attack rested less upon traditional arguments over constitutional strict construction than upon the competitive interests of speculative and fiscally irresponsible banking rivals. When he was subsequently denied the opportunity to speak in protest of Jackson's removal of public deposits and their redistribution among politically selected 'pet banks,' Adams published his remarks in a pamphlet suitable for widespread dissemination." (Quoted from American National Biography Online's entry on Adams by Mary W. M. Hargreaves.)
Provenance: The Estate of David Spinney.
Estimate $3,500-4,500