Vancouver, George (1757-1798) A Voyage of Discovery to the North Pacific Ocean, and Round the World. 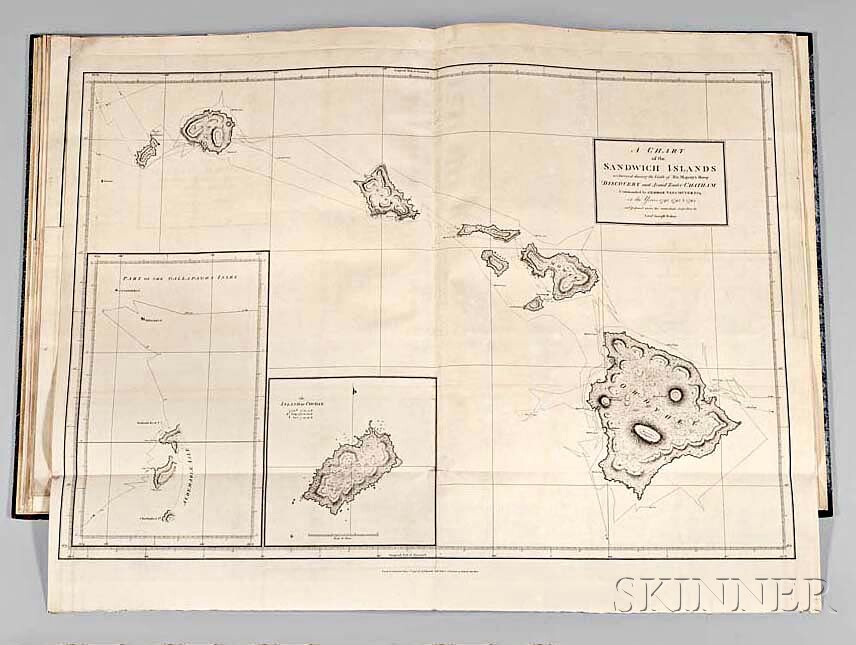 Vancouver, George (1757-1798) A Voyage of Discovery to the North Pacific Ocean, and Round the World. London: Printed for G.G and J. Robinson and J. Edwards, 1798. First edition, four volumes: three large quarto text volumes and one folio atlas volume; half-titles present in second and third volumes, 3 pages of errata at the end of the third volume, text volumes illustrated with eighteen engravings; the atlas volume illustrated with ten folding engraved charts and six plates of coastal profiles; the set bound in uniform modern half mottled calf and marbled paper boards, with ornately gilt-tooled flat spines; half-title in volume three with expert restoration; text volumes: 11 1/2 x 9 in.; atlas volume: 21 1/2 x 16 3/4 in. (4)
Vancouver served on Cook's second and third voyages. On the present expedition, he was meant to examine the Northwest coast of North America in order to reclaim Britain's rights to land following the Nootka Convention, and to search for a possible passage to the Atlantic. "This voyage became one of the most important ever made in the interests of geographical knowledge. Vancouver sailed by way of the Cape of Good Hope to Australia, where he discovered King George's Sound and Cape Hood, then to New Zealand, Hawaii, and the northwest coast of America. In three seasons' work Vancouver surveyed the coast of California; visited San Francisco and San Diego; [...] settled the necessary formalities with the Spanish at Nootka, investigated the Strait of Juan de Fuca; discovered the Strait of Georgia; circumnavigated Vancouver Island; and disproved the existence of any passage between the Pacific and Hudson Bay." (Quoted from The Hill Collection of Pacific Voyages at the University of California, San Diego, New Haven & Sydney: William Reese Company & Hordern House, Ltd., 2004.)
Provenance: The Estate of David Spinney.
Estimate $20,000-30,000