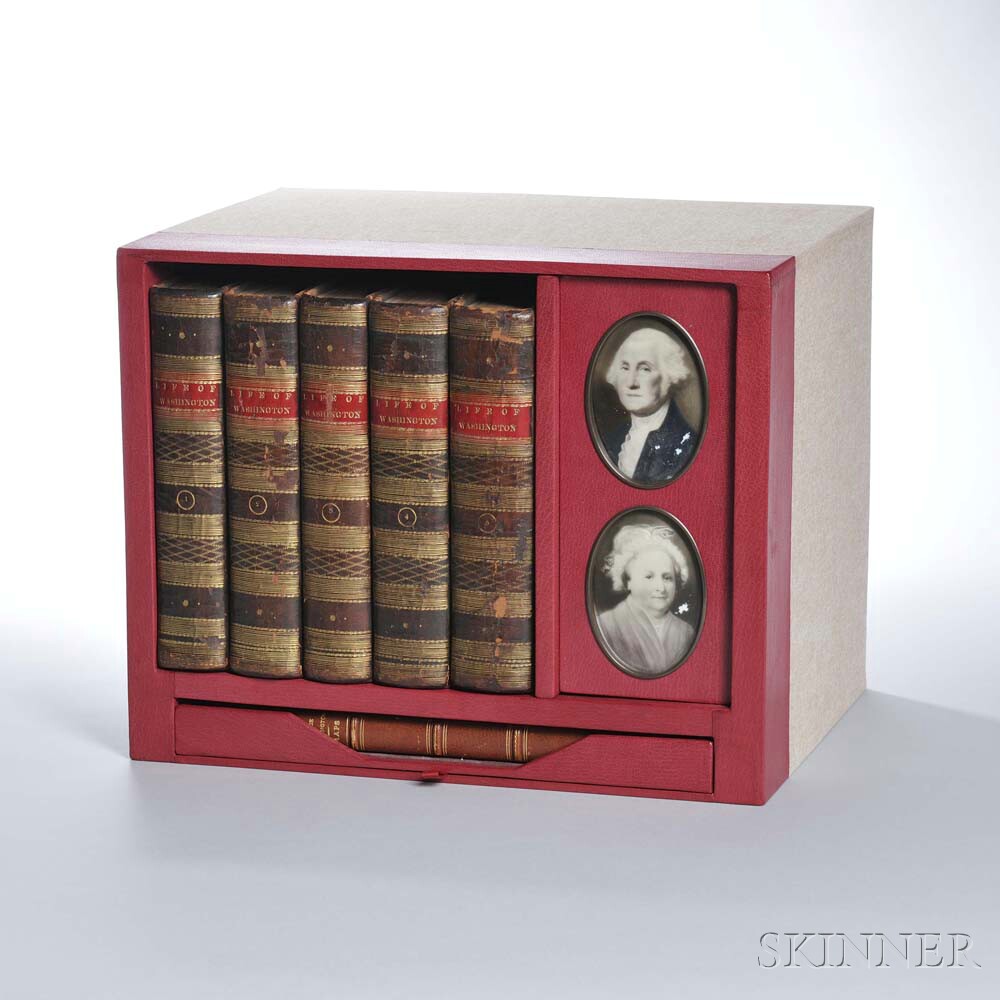 Marshall, John (1755-1835) The Life of George Washington. Philadelphia: C.P. Wayne, 1804-1807. First edition, six octavo volumes, frontispiece portrait in volume one, bound in full contemporary brown tree calf, gilt; the atlas volume illustrated with ten maps (eight of which are double-page), bound in original gray paper boards with a later cloth spine; all volumes housed in a custom-made display box with two later ceramic portraits of George & Martha (circa 1900); atlas volume with some offsetting, light scattered foxing to text, binding spine toned, light wear to extremities, each text volume 8 1/2 x 5 in.
John Marshall was the fourth Chief Justice of the United States Supreme Court, nominated to the office by John Adams. Marshall was a great admirer of Washington, and with the help of his descendants, pulled from original sources to complete this magnum opus chronicling not only the life of the first American President, but the birth of the nation he led. "Actually, the Life is about much more than Washington. Washington was father of his country, and Marshall's Life of Washington is political history as well as biography. The Life is the only comprehensive account by a great statesman of the full founding of the United States—of the founding of an independent people as well as of its government. We see the war that freed and partly formed, and then the political deeds that made of tenuous union a self-governing country. We see these from the governing point of view: of the Commander in Chief and founding President without whom, Marshall suggests, neither would have happened. There is no other concentrated history of the essentials by such an authority on American institutions. It is a historical-political companion to that old bible of American institutions, The Federalist Papers." (Quoted from John Marshall, The Life of George Washington, Special Edition for Schools, ed. Robert Faulkner and Paul Carrese. Indianapolis: Liberty Fund, 2000. 8/11/2016. http://oll.libertyfund.org/titles/849).
Provenance: The Estate of David Spinney.
Estimate $4,000-6,000