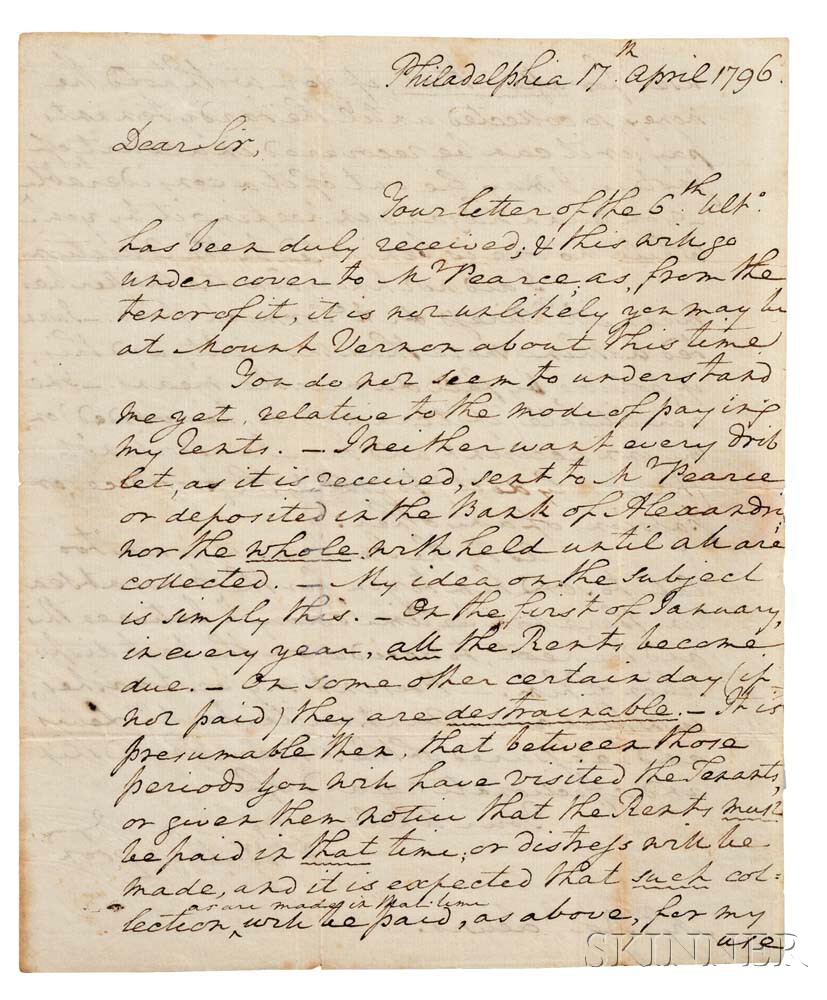 Washington, George (1732-1799) Autograph Letter Signed, Philadelphia, 17 April 1796. Laid paper bifolium inscribed over two pages, to Robert Lewis, with self-envelope franked in Washington's hand, "President U.S."; the letter instructs Washington's nephew on the proper collection of rents, and other matters. Very clear, in good condition, 9 x 7 1/4 in.
"Dear Sir, Your letter of the 6th ulto has been duly received; & this will go under cover to Mr. Pearce; as, from the tenor of it, it is not unlikely you may be at Mount Vernon about this time.
You do not seem to understand me yet, relative to the mode of paying my rents.-- I neither want every driblet, as it is received, sent to Mr. Pearce, or deposited in the Bank of Alexandria; nor the whole withheld untill all are collected.-- My idea on the subject is simply this.-- On the first of January, in every year, all the Rents become due.-- On some other certain day (if not paid) they are destrainable.-- It is presumable then, that between those periods you will have visited the Tenants or given them notice that the Rents must be paid in that time; or distress will be made, and it is to be expected that such collection as are made in that time will be paid, as above, for my use; for after that; if you withhold the money, so collected until the tardy tenants pay; or it can be recovered in account of Justice, I may lie out of it a considerable time-- you run a hazard in keeping it by you, while no one is benefited by the Collection.
I did not know how the matter between Mr. Airess & McCormick stood.-- I wanted nothing more than my right;-- and this, if possible, by fair & amicable means.-- I never litigate (if it can possibly be avoided) on my own account, and sure I am with not (knowingly do it) to gratify the prejudice, or passion of any other.
As to the Jack, as it is now too late to send him to you for the present season, there will be time enough between this and the next, to decide on the best disposition of him.-- Present my best wishes, in which your Aunt writes, to Mrs. Lewis and be assured of the sincere friendship and affectionate regard of Your Uncle, Go: Washington."
Washington writes as President to his nephew, Robert Lewis (1769-1829) regarding his method of collecting rents. He also mentions that he tries to avoid litigation, when speaking of a land dispute between neighbors Ariss and McCormick and himself, and ends with a note about his "Jack" or donkey, named Compound, who he would send out for breeding. Washington began using donkeys at Mount Vernon in 1785, with Royal Gift, who was given to him by Charles III of Spain.
Provenance: The Estate of David Spinney.
Estimate $10,000-15,000