Bligh, William (1754-1817) A Voyage to the South Sea, Undertaken by Command of His Majesty, for the Purpose of Conveying the Bread-Frui 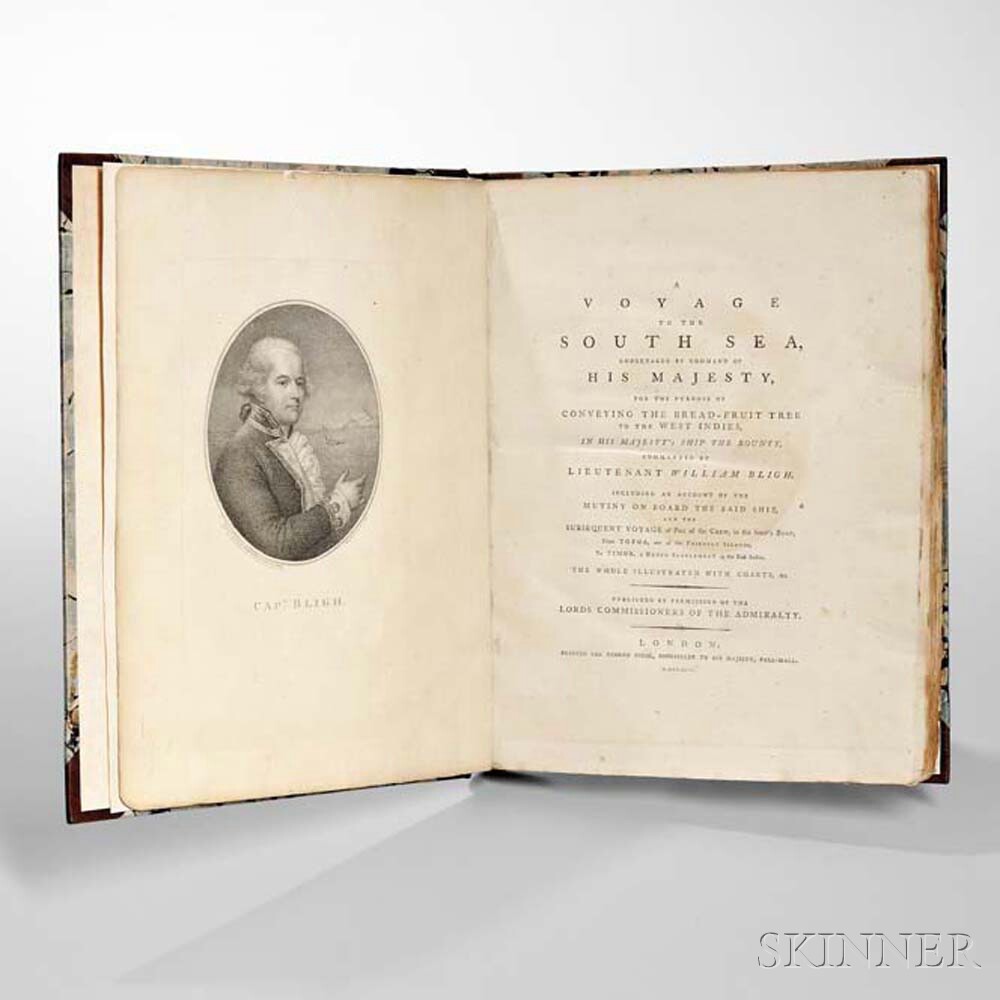 Bligh, William (1754-1817) A Voyage to the South Sea, Undertaken by Command of His Majesty, for the Purpose of Conveying the Bread-Fruit Tree to the West Indies, in His Majesty's Ship the Bounty. London: for George Nicol, 1792. First edition, large quarto, stipple-engraved frontispiece of Bligh, illustrated with seven engraved plates, charts, and plans, bound in expert half modern dark brown russia in very good period style, with contemporary marbled paper boards, large margins, deckled edges, 12 1/2 x 9 1/2 in.
Bligh's voyage at the helm of the Bounty, began as a fairly straightforward mission to collect breadfruit trees from the island of Tahiti and bring them to British colonial islands in the West Indies, where it was thought they would grow well and provide inexpensive food for enslaved people forced to work on plantations. However, the five-month layover in Tahiti proved too great a test of the crew's dedication to their commander. Fletcher Christian and a number of other sailors staged a mutiny in response to Captain Bligh's behavioral crack-down. The Captain was struggling to keep order, and it seems from all accounts that some of his disciplinary actions may have been harsh. This volume contains "a revised version of the text of Bligh's narrative of the mutiny, previously published in London in 1790. [...] This account was based upon Bligh's journal but was written, edited, and seen through the press by James Burney, under the supervision of Sir Joseph Banks, during Bligh's absence from London while on his second breadfruit voyage." (Quoted from The Hill Collection of Pacific Voyages at the University of California, San Diego, New Haven & Sydney: William Reese Company & Hordern House, Ltd., 2004.) Once Christian and the other mutineers successfully seized control of the ship, they saw fit to cast Bligh and eighteen other sailors off in an open twenty-three foot launch, expecting that they would never be seen again. Bligh and his men safely made their way across 3,618 nautical miles of sea, after a journey of six weeks under dire conditions.
Provenance: The Estate of David Spinney.
Estimate $9,000-11,000