Political Autographs, Abraham Lincoln, Chester A. Arthur, Rutherford B. Hayes, and Others. 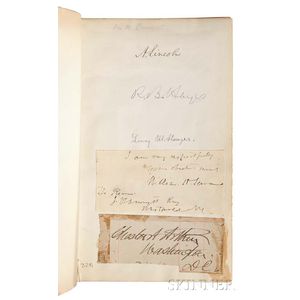 Political Autographs, Abraham Lincoln, Chester A. Arthur, Rutherford B. Hayes, and Others. Philadelphia: Lippincott & Co., 1860s-1880s. Octavo, commercially produced autograph album, bound in full contemporary morocco, with "Autographs" tooled in gilt on the front board (and in blind on the back) and a printed title page; ex libris John W. Ray, with his signature on ffep, dated July 4, 1864, noting "Dept. of the Interior" (Ray is likely to be from Indiana, he attended DePauw University [at that time Asbury University] in the 1840s; he would have served under fellow-Hoosier, Judge John Palmer Usher, who headed the department in that year); containing approximately 58 pages with signatures, the other twenty or so left blank; many signatures are on the leaves themselves, others are pasted into the album from letters, cards, and other places; ex libris Washington Cathedral Library, with their bookplate inside the front board, 8 1/2 x 5 1/4 in.
Signers include: Abraham Lincoln, Rutherford B. Hayes, Chester Arthur, William Seward, John Palmer Usher (and other Lincoln cabinet members), Schuyler Colfax, Thaddeus Stevens, John Ross (principal chief of the Cherokee Nation), and several hundred other senators, house representatives, and presidential cabinet members. Lincoln's cabinet in particular is well-represented.
Provenance: The Estate of David Spinney.
Estimate $5,000-7,000