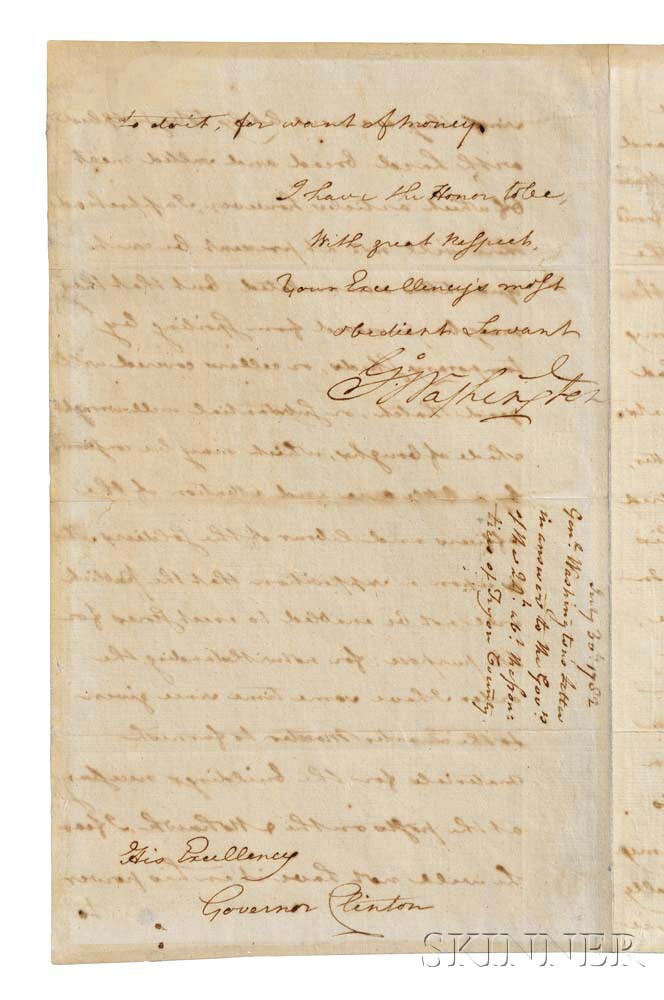 Washington, George (1732-1799) Letter Signed, Newburgh, New York, 30 July 1782. Laid paper folio-format bifolium, inscribed over four pages, to Governor George Clinton (1739-1812), regretting "want of money to afford a sufficient detachment," mentioning "the repeated depredations that have been committed on your Western frontiers," and urging Clinton to keep him abreast of "the force of Willet's corps now assembled on the Mohawk, also the strength of the enemy at Oswego." Old folds, very slight toning, minor water discoloration in one corner, some ink show through, very good, professionally strengthened, 11 3/4 x 7 in.
"Sir, I have been honored with your Excellency's favor of the 24th inclosing the Copy of a Letter From Col. Willet—From which I have learnt with great concern the repeated depredations that have been committed on your Western frontier, and should be extremely happy (were it in my power consistent with the general state of affairs) to afford a sufficient Detachment from this Army to cover the whole country; but I dare say you must be sensible this is not the case. How far it may therefore be expedient to call forth an additional aid of Militia, I shall submit to your Excellencys judgment, as you are better acquainted with the circumstances of the frontier, the strength of Willets command, and probably the state of the Enemy at Oswego, than I am. In the mean time, I wish to be informed as far as may be in your power, of the force of Willet's Corps now assembled on the Mohawk, also of the strength of the Enemy at Oswego, of which I have as yet had only vague and unsatisfactory accounts.
Since the date of Col. Willet's Letter, he has, I suppose, received four hundred cartridge Boxes, in which Article his most essential deficiency consisted. In consequence of which I cannot but hope, that corps in conjunction with the Continental regiment stationed in that quarter will be able to give a better protection to the Country than has lately been the case, and to chastise the insolence of the enemy in any future incursion, especially since they are now likely to be supplied with hard bread and salted meat—Of which articles, however, I apprehend there will not at present be such quantities accumulated, but that they may be preserved from spoiling by temporary sheds, or cellars covered with good thatch, or substantial well-wrought shade of boughs, which may be constructed by a little care and attention of the officers and labour of the soldiers. This is upon a supposition that the public will not be enabled to erect stores for the purpose; for notwithstanding the order I have sometime since given to the Quarter Master to furnish materials for the buildings necessary at the posts on the Mohawk, I fear he will not have it in his power to do it for want of money. I have the Honor to be, with great respect, Your Excellency's most obedient Servant
Go: Washington"
Provenance: The Estate of David Spinney.
Estimate $15,000-20,000