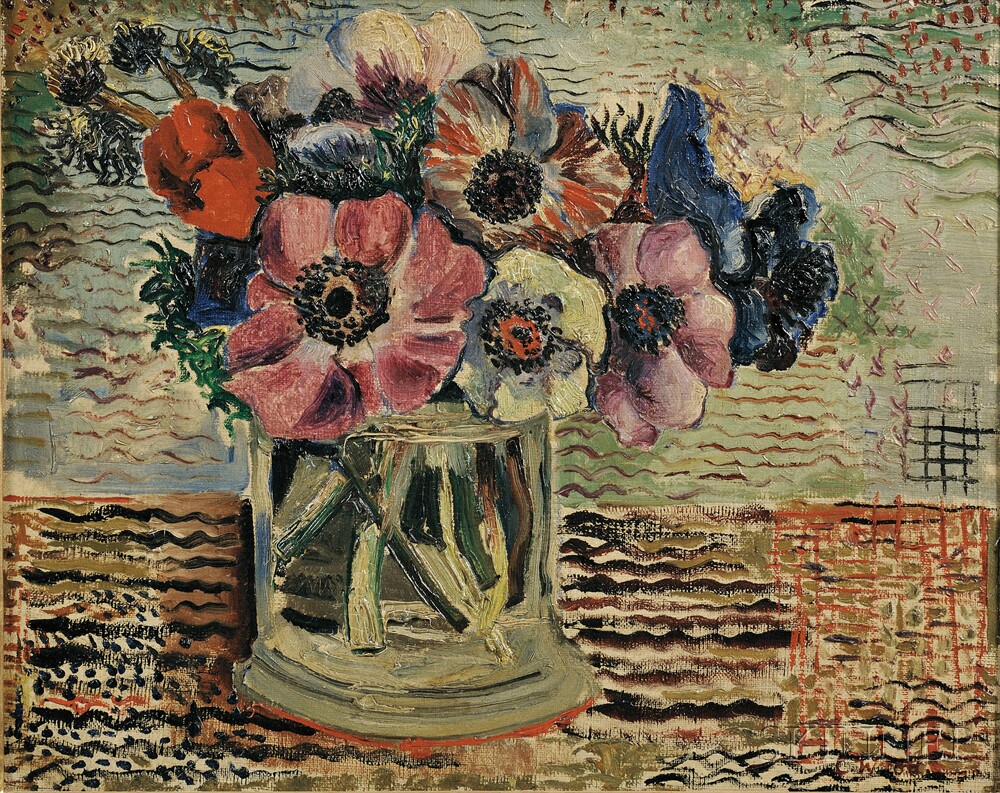 N.B. Christopher Wood, also known as Kit, was born in Knowsley, near Liverpool, on April 7, 1901. He purportedly started drawing at the age of fourteen, while convalescing from septicemia. In 1920 the young Wood met the French collector Alphonse Kahn, who invited him to Paris. Wood studied at the Académie Julian and traveled throughout Europe during the early 1920s. Charming and ambitious, Wood met the Chilean diplomat Antonio de Gandarillas, who introduced him to Picasso, Georges Auric, and Jean Cocteau. Wood learned from these Parisian artists, and although his paintings were regarded as graciously naive, he especially embraced the elegant line of Cocteau's drawings.

In the mid-1920s Wood returned to England and became a member of the London Group, a clique of artists based in Camden Town, and the Seven and Five Society, the British manifestation of the return to order that followed the First World War. It is at this point that Wood painted Anemones in a Glass. A dense cluster of pink, violet, blue, and red anemones burst from a clear, unembellished jar. The flowers sit atop a simple orange table in front of a teal blue background. A fluid, patterned decoration, made up of undulating lines and soft cross-hatching, extends across the surface of the canvas, creating a visual interplay between the painting's three-dimensional depth and two-dimensional surface. The painting reveals Wood's mastery in rendering visual details as well as spirited playfulness in depicting line and form.

In London, Wood had his first major exhibition with Ben and Winifred Nicholson at the Beaux Arts Gallery from April to May, 1927. A solo exhibition at the London Tooth's Gallery in April 1929 was succeeded by an exhibition again with Nicholson at the Galerie Bernheim in Paris in May 1930. It is at this point that Wood was at the apex of his career. He was planning an exhibit at the Wertheim Gallery in London for the fall, when Wood met his mother and sister in Salisbury on August 21, 1930. He was in an unstable state of mind, possibly suffering from opium withdrawal, and jumped in front of a train, tragically truncating what seemed to be a promising career. In 1938 Wood's paintings were included in the British pavilion at the Venice Biennale and a major exhibition was organized by the Redfern Gallery at the New Burlington Galleries, which strove to reunite Wood's complete works.
Estimate $70,000-90,000