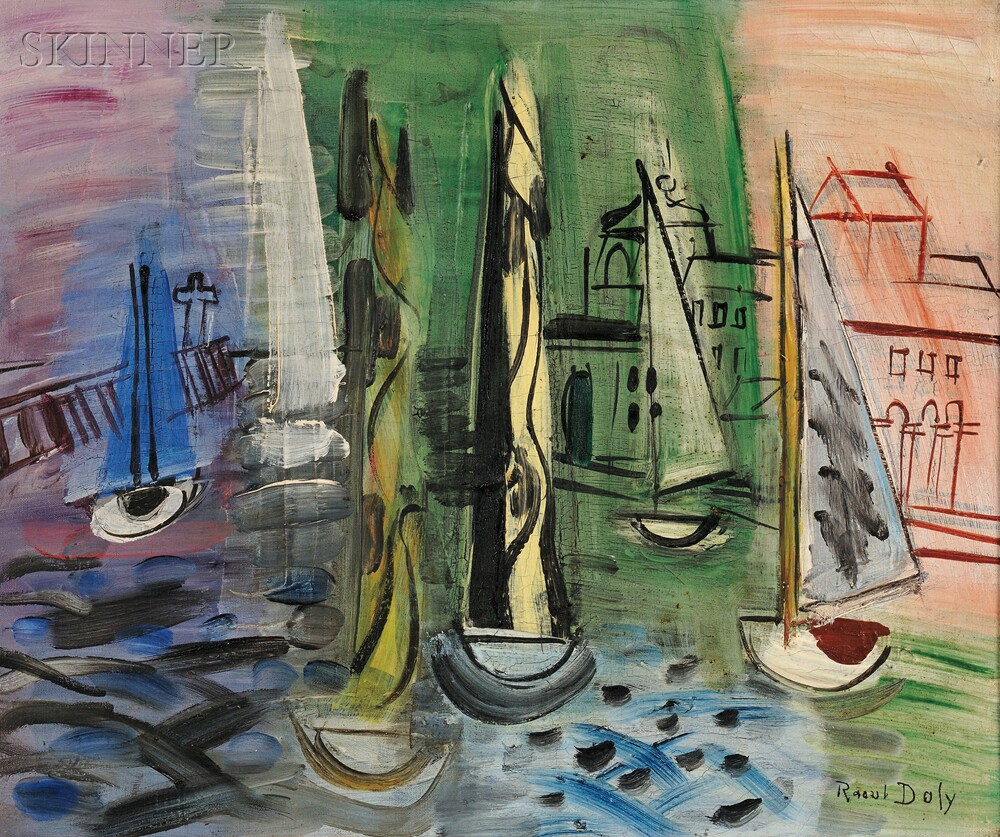 Provenance: Purchased in Paris in the early 1950s, to a private Virginia collection.

N.B. Legend has it that upon painter Raoul Dufy's death, Henri Matisse proclaimed: "Dufy's work will live!" Dufy had mutual esteem for his fellow Fauvist painter and was greatly influenced by his work at the infamous 1905 exhibition at the Salon d'Automne. There, Dufy had a revelation and said: "How can I use these means [the pigments and brushes] to express not what I see, but what is, what exists for me, my reality? … To study sunlight is a waste of time. Light in painting is something quite apart: it is composed, it is arranged, and it is colored." From that moment, Dufy used bold, bright colors and vivid brushstrokes to depict lighthearted garden parties, breezy regattas, and velocious horse races.

Born Raoul-Ernest-Joseph Dufy on June 3, 1877 in Le Havre, a busy seaport on the north bank of the Seine estuary, the young artist showed talent at an early age. In 1900, the town of Le Havre awarded him a grant to study art in Paris where he learned, and then had to unlearn, the lessons from the Academy des Beaux Arts. Although based in Paris, Dufy traveled extensively throughout France, often finding himself drifting towards the coast to capture scenic sea views. Like the Impressionists, Dufy frequently painted a large number of pictures of the same motif, varying ever so slightly certain compositional details and color hues. Unlike that earlier generation of artists, Dufy's audacious colors radically departed from natural hues, exuding the confidence of his Fauvist counterparts.

This cheerful painting of the regattas at Trouville was most probably completed in 1935 when Dufy was at the peak of his career. Boats bob lightly through the choppy waters as they enter the harbor. Dufy simplified the schooners, and overlooking buildings, to their essential forms using thick black outlines and gestural brushstrokes. Seemingly superimposed over this view of Trouville, are large, bright sections of blue, green, and red. These areas of pigment are dissociated from the descriptive task of rendering the arresting view, and yet the colors dramatize the regatta. Coincidentally, Claude Monet painted the same harbor some 56 years before Dufy. This would not have been lost on the Fauvist, who at the time had, at last, attained considerable fame. While Monet diligently depicted the reflections of sails and hulls on the shimmering water, Dufy abstracted from nature to render the same view with chromatic brilliance and dynamic force.

A certificate of authenticity issued by Raoul Dufy scholar Fanny Guillon-Laffaille will accompany the lot.
Estimate $120,000-180,000

Crackle most evident in the black mast and yellow sail of the central boat. Also visible in the blue mast of the boat on the left. Surface grime particularly visible in the upper right quadrant. French School, 18th Century Herders at Rest in a Landscape