N.B. Florine Stettheimer is an artist's artist, a painter, designer, and poet. Born in Rochester, New York, into a wealthy, intellectual German banking family, Florine spent her childhood in Europe. She studied at the Art Students League of New York from 1892 to 1895, then returned to Europe where she lived with her mother, Rosetta, and two sisters (Caroline and Henrietta) until the outbreak of World War I in 1914.

Financially independent, Florine Stettheimer did not need to sell her works. While she exhibited periodically at the Society of Independent Artists and the Whitney, she had only one one-woman show during her lifetime. This was held in 1916 at Knoedler & Co., and featured high-keyed works inspired by Matisse. None of the twelve works in the show sold, and she chose not to go this route again. She had no taste for publicity, and did not relish participating in exhibitions. Instead, she showed her paintings primarily through the salons that she and her sisters, known as "The Stetties," held in their apartment on West 58th Street in New York. Their lifestyle became legendary, with Florine painting, Carrie decorating an enormous dollhouse (now in the Museum of the City of New York),and Ettie writing fiction. Their salons brought together an elite intellectual circle of artists, poets, and actors of the day, including Marcel Duchamp (of whom Florine painted several portraits),Zorach, Archipenko, Picabia, Lachaise, and O'Keeffe, art critic Henry McBride.

Florine Stettheimer had wide ranging interest in art from many periods including Japanese prints, Persian miniatures, and early Renaissance paintings, which share an emphasis on decorative schemes of color, pattern, and rhythm. She used bold color, faux-naïve style, and inventive compositions as she developed her highly personalized, mature style. In 1917 she painted Sunday Afternoon in the Country, a pivotal work now in the collection of The Cleveland Museum of Art. The scene depicts a weekend picnic at the family's country home on the Hudson River and is typical of the narrative aspects of her work. The artist shows herself in the upper right, working at her easel, while in the foreground at lower left photographer Edward Steichen is photographing Marcel Duchamp, with Florine's sister Ettie standing behind him with her arms outstretched.

Florine Stettheimer did not feel restricted by the boundaries of two-dimensional art. In 1934 she designed avant-garde costumes and sets for the opera Four Saints in Three Acts, with a libretto by Gertrude Stein and music by Virgil Thomson, perhaps finding inspiration from time spent in Paris (1912) where she experienced the excitement of Diaghilev's Ballets Russes. She also wrote poetry that some have compared to Emily Dickinson, with their richly imaged inner solitude.

After her mother died in 1935, the Stettheimer household broke up. Florine lived alone at her studio and home at 8 West 40th Street and devoted herself to her art. Among other important work, she completed the series of four paintings known as the Cathedrals series, now at the Metropolitan Museum of Art: Cathedrals of Broadway (1929),Cathedrals of Fifth Avenue (1931),Cathedrals of Wall Street (1939),and Cathedrals of Art (1942-44).

At the time of her death in 1944, most of Florine Stettheimer's paintings were still in the possession of her family. Ettie Stettheimer donated works to many museums, and two years after her death, a large retrospective was held at the Museum of Modern Art.
Estimate $75,000-100,000 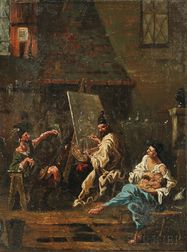 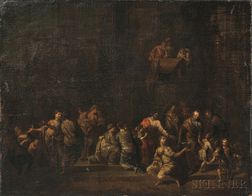 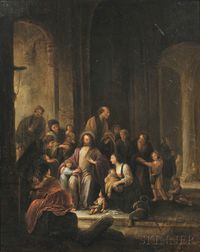 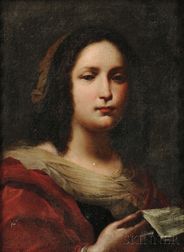 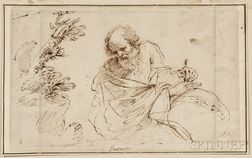 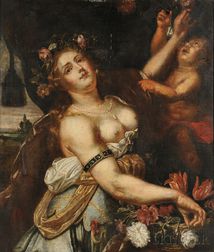 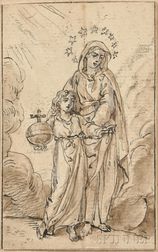 Manner of Andrea Celesti (Italian, 1637-1706) Christ Being Nailed to the Cross