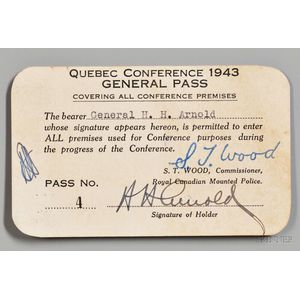 Arnold, Henry Harley "Hap" (1886-1950) Signed General Pass to the Quebec Conference, August 1943.
click on any image to enlarge
Previous Next

Arnold, Henry Harley "Hap" (1886-1950) Signed General Pass to the Quebec Conference, August 1943.
Printed card with Arnold's name typed, signed by S.T. Wood, Commissioner of the Royal Canadian Mounted Police and by Arnold, 4 1/2 x 2 3/4 in.
In the first Quebec Conference, a secret military summit, Churchill and FDR met for the first time to discuss a joint attack on the German forces in France, that would eventually become the Normandy Invasion. Canada, Britain, and the U.S. agreed to concentrate on the development of the atomic bomb in earnest, and Churchill and Roosevelt also secretly signed the Quebec Agreement vowing to share nuclear technological developments.
Estimate $1,500-2,000