Flights: Unforgettable Exploits of the Air, Seven Prints, by Frank Lemon (1890-1943) Five Signed by Aviators. [No place]: Wright Aeronautical Corporation, 1928.
Seven lithographs commemorating great moments in flight, the following signed: The Wright Brothers' "Strange Contraption" rises at Kitty Hawk, 1903, signed by Orville Wright; With one beat of his wing, Charles Lindbergh goes to Paris! 1927, signed in pencil by Charles A. Lindbergh, 1935; The conqueror of one pole attempts the other: Commander Byrd, the Antarctic, 1929, signed by Admiral Byrd, very faint, barely visible; Lieut-Commander Albert C. Read nears the Azores in a navy plane, 1919, inscribed by Read to Wallace B. Donham; and Louis Bleriot passes the White Cliffs of Dover in May, 1909, inscribed to Donham by Bleriot, date in title corrected by hand to read July; the two remaining prints in the set unsigned, viz., To Australia by air: Kingsford-Smith and his companions over Suva, 1928; and Crossing the States in the span of the same sun. Lieutenants Macready & Kelly, 1923; all prints toned to varying degrees, the paper brittle, the two unsigned prints mounted on board, the others quite delicate, some short tears, chipping, with losses, 20 3/4 x 16 3/4 in. (7)
Estimate $400-600 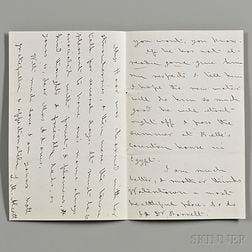 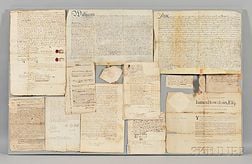 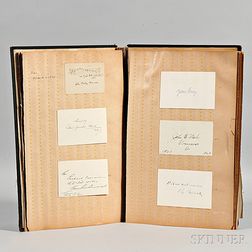 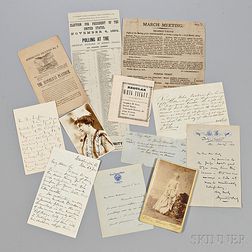 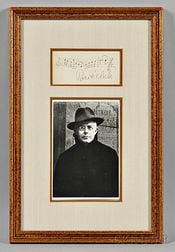 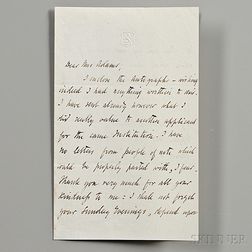 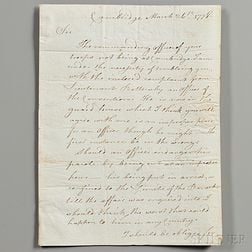