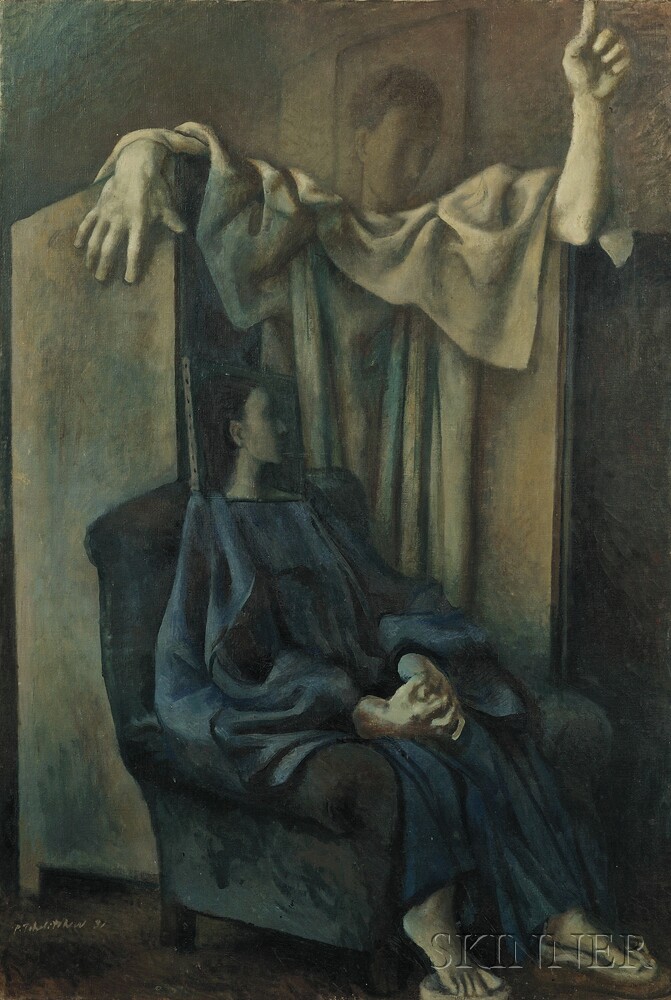 N.B. Pavel Tchelitchew was born near Moscow to a wealthy family. Forced to flee during the Russian Revolution of 1917, Tchelitchew went first to Kiev where he began his formal art training at the Academy of Art, studying with Alexandra Exter, a pupil of Fernand Leger. From Kiev he went on to Berlin where he began working as a stage designer, a field that continued to engage the artist throughout his career. Moving to Paris in 1923, Tchelitchew began to do set and costume designs for Serge Diaghilev ballets. At this time he also had success with easel painting, developing a technique of showing multiple images on a single canvas, often using multiple perspectives. In 1925 Tchelitchew exhibited a painting at the Salon d'Automne, catching the attention of Gertrude Stein who brought the young artist into her elite intellectual circle. Stein introduced him to Picasso's early paintings of 1905-06, which influenced Tchelitchew to flatten pictorial space and limit himself to monochromatic variations of the same color. Paring his palette first to earth colors, he further limited color eventually to gray and white tones, using heavy impasto and sometimes incorporating coffee grounds and house paint.

Tchelitchew came to the United States for the first time in 1934, and had his first American one-man show at the Julian Levy Gallery. In New York he designed ballet sets for George Balanchine and Igor Stravinsky. In 1942 Tchelitchew completed his best known painting, Hide and Seek, which was purchased by the Museum of Modern Art in New York. This work presents three different events taking place in three moments of time, seen from three different perspectives.

The painting at hand, dated 1931, displays the artist's muted palette of blues and grays. It is a very modern Annunciation. The columnar angel, minus the usual trappings of wings and halo, stands behind the figure of Mary and gestures toward heaven with one pointed finger, while Mary, her head in profile painted on a stretched canvas resting on her draped body, sits in a contemporary arm chair. The figures occupy an ambiguous, enclosed space that is animated by the accordion-like screen on which the angel drapes his arms.
Estimate $70,000-90,000

The canvas has been restretched and the lining is adhered with wax. There is some fine scattered (stable) craquelure, plus a more visible area of craquelure with separation (also stable) near the lower right corner. In this same areas (surrounding Mary's feet) there is retouch. There are also additional minor dots and dashes of retouch.