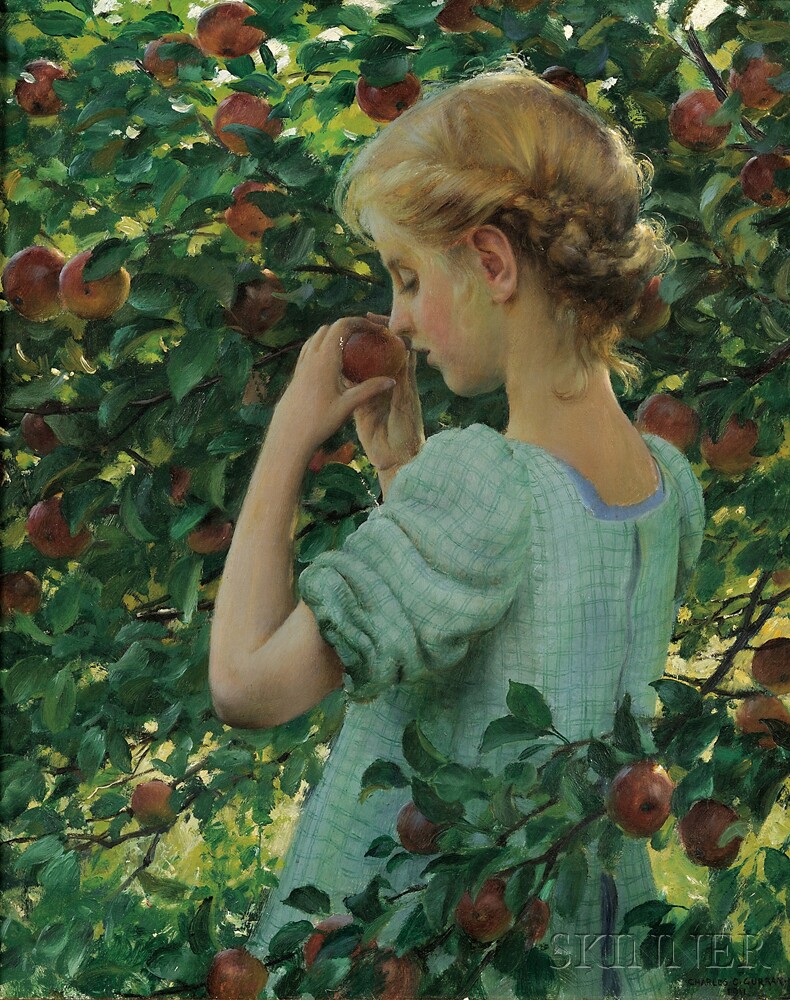 Provenance: Through the collection of William Knickerbocker Wallbridge (1882-1979) of Connecticut, to the current owner by family descent.

N.B. Born in Kentucky, Charles Courtney Curran received art training in New York City at the National Academy of Design and the Art Students League, where he was active in the 1880s. He then journeyed to Paris to study at the Académie Julian from 1889 to 1891. In 1903, at the invitation of fellow artist Frederick Dellenbaugh, Curran visited the hamlet of Cragsmoor, an art colony along the Hudson River north of Poughkeepsie that had been founded in the early 1870s and was home to E. L. Henry, J.G. Brown, and other notable painters and illustrators. Curran acquired a studio there in 1910 and divided his time between Cragsmoor and New York City for the rest of his career. It was in Cragsmoor that he developed his hallmark style of figures of young women set in light-filled garden views or against sweeping hilltop vistas. The painting at hand, Apple Perfume, is dated 1911, after his move to Cragsmoor, and captures the delight and simple beauty of a child savoring the scent of a newly picked apple.
Estimate $50,000-70,000

One inch vertical abrasion with paint loss to center just above her sleeve, the abrasion showing through as a raised area on the back of the canvas but without breaking through the canvas fibers. A 1/4 inch abrasion with paint loss in her left hand. Small patch reinforcement on the reverse measuring 1 x 1/2 inch and corresponding to a 3/4 inch dotted line of retouch on the front u.l. quadrant located in the leaves about 1/2 inch to the left of her wrist. Small areas of retouch as follows: a triangle beneath her chin measuring 1/4 x 1/2 inch, brush marks along the inside edge of her forearm, in the shadow beneath her thumb, and just on the top of her fingers. Subtle rippling to canvas, which would benefit from keying out. Small paint loss, 1/8 inch diameter, beneath the frame liner l.c.