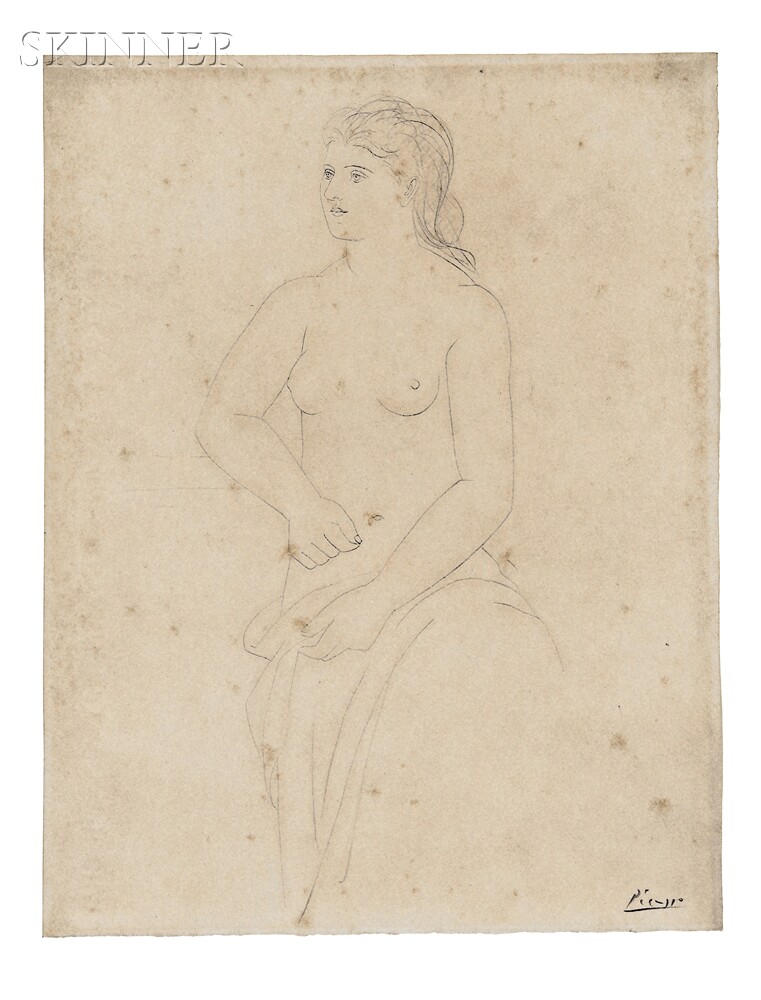 
N.B. A photo-certificate issued by Claude Ruiz-Picasso of the Picasso Administration accompanies the lot. We wish to thank Mr. Picasso and Christine Pinault for their kind assistance.

Hester M. Chanler was a descendent of the Astor family by her paternal grandmother Margaret "Maddie" Astor Ward (1838-1875) and her grandfather New York congressman John Winthrop Chanler (1826-1877). While she was born into a family of social prominence and wealth, it was also one of artistic achievement--her mother Margaret (née Terry) Chanler, uncle Francis Marion Crawford, and aunt Mary Crawford Fraser all published works of fiction and non-fiction; her maternal great-aunt Julia Ward Howe wrote the song "Battle Hymn of the Republic," and her maternal grandfather Luther Terry painted allegorical, portrait, and genre scenes.

In 1915, Hester, who attended Radcliffe College and was fluent in several languages, married the scholar Edward Motley Pickman (1886-1959), a Harvard graduate and descendant of the Pickman merchant family of Salem.

Between the autumns of 1921 and 1923, the Pickmans (with their four children) went on a 'modernized' Grand Tour of France, Germany, and Italy, and are believed to have acquired the drawing during this period. (1) The Pickmans were close friends of Sara and Gerald Murphy, who were also in France at this time, and joined them on some adventures. During the autumn of 1921 in Paris, Hester and the Murphys studied painting for six months under Natalia Goncharova, where they were critiqued daily by Goncharova and her partner Michel Larionov. (2) As a result of their intensive practice and on Goncharova's praise, Sergei Diaghilev gave the three artists an opportunity to paint backdrops for the Ballet Russes' spring 1922 season. (3) Pablo Picasso, who had collaborated with Diaghilev earlier in the year for the May performance of Cuadro flamenco and was married to Ballet Russes principal Olga Khokhlova, was amongst the artists who came in to supervise their work and offer corrections. (4) By January 1922, the Murphys (and presumably the Pickmans) were socializing with Picasso over cocktails around Paris. (5)

During the summer of 1922, the Pickmans and Murphys vacationed together in Houlgate, a seaside resort in Calvados, Normandy. (6) In a letter from Hester M. Pickman to her sister Laura Chanler White (the daughter-in-law of architect Stanford White), Hester describes their residence, Villa Germaine, as ideally situated between a town, the beach, the countryside, and "4 or 5 nice friends, i.e. the Murphies [sic]..." (7)

In 1923, the Picassos and Murphys summered in Cap d'Antibes on the Côte d'Azur, frequently socializing at La Garoupe beach. Picasso continued to work in a linear, neoclassical style, creating a number of drawings depicting the Three Graces and idealized female nudes. Sara Murphy, with her well-defined features and easygoing manner, served as a model and muse to Picasso during their stay in July. (8) While the sitter of the present work is unidentified, her profile bears a strong resemblance to Sara Murphy as depicted in the ink drawing Femme au Turban, created the same year. And while it not yet known how and when this recently rediscovered work was acquired by the Pickmans, one can surmise that the drawing may have been a souvenir of their time in France with the Murphys and Picasso.

Probably drawn with a hard lead graphite pencil due to its lightness in color and some impressed lines into the wove sheet.

Under microscopic examination, 'foxing' appears to be mold-based and on the surface, and not the result of iron oxide within the paper; treatment would likely involve a bleach solution.

Sheet with "CANSON & MONTGOLFIER VIDALON-LES-ANNONAY" watermark to the reverse. 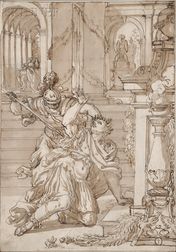 French School, 17th/18th Century Murder on the Steps of a Roman Palace 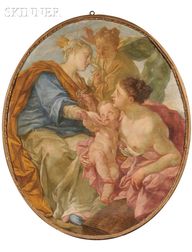 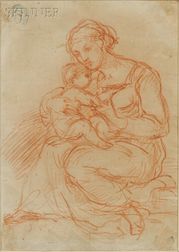 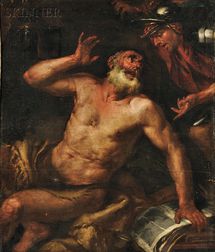 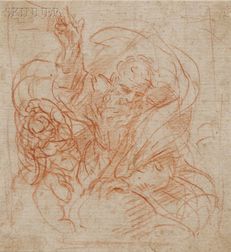 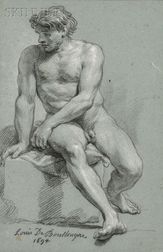 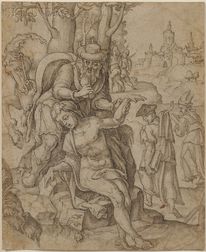