Hancock, John (1737-1793) Signed Military Commission to the Rank of Major, John May (1748-1812) 1 July 1781. [and] Military Commission appointing May Adjutant of the Boston Regiment of Militia, 10 October 1778.
Two printed documents on paper, completed by hand, the first signed by Hancock as Governor of Massachusetts, both signed by John Avery as Secretary; both with the seal of the Commonwealth; the 1778 document also signed by fifteen members of the Council of Massachusetts Bay: Jeremiah Powell, Artemas Ward, J. Cushing, B. White, Benjamin Austin, Daniel Davis, D. Hopkins, Oliver Prescott, N. Cushing, Oliver Wendell, Samuel Niles, E. Brooks, and others, both toned with old folds, framed; the Hancock document 12 1/2 x 11 in.; the other 12 3/4 x 12 3/4 in. (2)
John May participated in the Boston Tea Party, he served during Shay's Rebellion, rose to the rank of Colonel of the first Regiment of the Boston Militia during the Revolution, and ventured into Ohio in the late 1780s.
Estimate $3,000-5,000 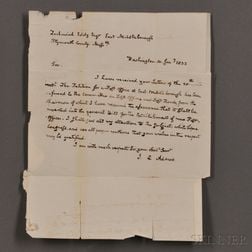