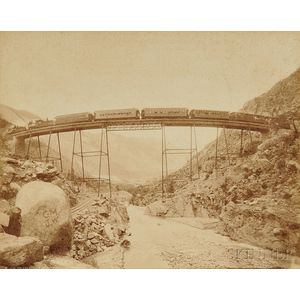 Jackson, William Henry (1843-1942) Thirty Photographs of the American West and Mexico, c. 1880.
Thirty mammoth format albumen photographs, each mounted on mat board, the subjects listed below, most with major foxing, fading, chipping, tears and damage to mats, and other damage, each approximately 21 x 16 3/4 in.

Jackson was born and raised on the East coast, and served in the Union Army as a private from Vermont during the Civil War. Returning home in the aftermath of the war, Jackson, originally trained as a painter, struggled to re-integrate into civilian life. He resolved to travel west, and took the Union Pacific railroad to the end of the line in 1866. Omaha, Nebraska was just a stop along the way, as his journey took him further along the Oregon Trail, heading west to the Great Salt Lake. Jackson brought his photography equipment as well, and his work quickly drew the attention of Ferdinand Hayden (1829-1887). He was invited to accompany the government geological surveys of 1870 and 1871. When Congress chose to designate Yellowstone National Park, Jackson's photographs played an important and persuasive role. Jackson was also employed by several railroad lines taking photographs in the 1890s. He eventually moved back east to Washington, D.C., where he painted several murals of the Old West for the Department of the Interior building. He died at the age of 99.