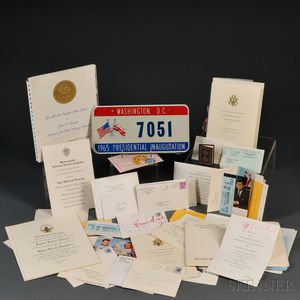 Kennedy, John Fitzgerald (1917-1963), Ephemera Archive, 1961-1965. Including invitations, tickets, programs, and other ephemera relating to the 1961 inauguration of JFK, inaugural galas and balls; invitations to Lyndon B. Johnson's inauguration, and other related ephemera, including two special 1965 presidential inauguration license plates issued by the District of Columbia Department of Motor Vehicles, unused, with the accompanying certificate; Kennedy's inaugural address printed as a miniature book by St. Onge of Worcester, in a gold-tooled leather binding; two invitations to JFK's birthday celebration on May 29, 1961; the plastic-comb-bound brochure produced for the All New England Salute Dinner to Kennedy, held in Boston on October 19, 1963; a bracelet with a medallion made to commemorate the christening of the U.S. Navy's aircraft carrier, the John F. Kennedy; and other related items.